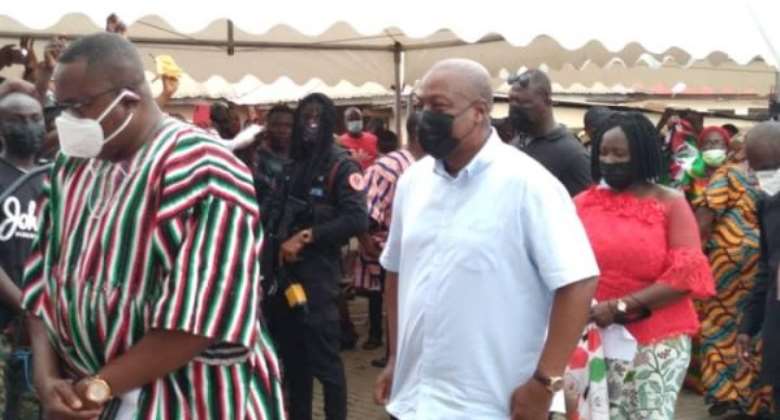 Former President John Dramani Mahama, has hinted that the party will do everything possible to make the 2024 general elections transparent, fair, and clean.

He said "the party would not allow anybody to cheat them in the 2024 general elections, and that they would also not do anything to cheat any party."

Mr Mahama said these at the Asogli Palace in Ho in the Volta region, when he paid a courtesy call on Togbe Afede XIV, the Agbogbomefia of Asogli State as part of his 'Thank you' tour.

He noted, “my 'do or die' comment meant the deployment of processes for transparency and fair elections far from the use of violence”.

The former President said he and the NDC were highly indebted to the people of the Volta region for their continuous support throughout the years.

Mr Mahama said the party appreciated the support of the chiefs and the people of the region and would not take it for granted as he uses Togbe Afede to reach out the chieftains in the region.

He said though the region had been split, looking at the 2016 election, the votes they had in the current Volta region went up by 113,000 votes and, “this was despite all the intimidation during the voter card registration, closer of the borders and invasion of the region by military.”

He said the NDC got 84.4 per cent of votes in the Volta region, which was the highest votes than any other region in the country.

Mr Mahama said the region had done a lot to propel the fortunes of the NDC to the height it was today and assured the chiefs that when the party comes back to power in 2024, the region would have its fair share of the national cake.

He described as a palpable false that the region did not see any development under the party when they were in power, saying, the region had witnessed massive socio-economic development ranging from health, education, water, electricity, roads among others.

The former President commended Togbe Afede for his role in enhancing the development of the country, citing the Asogli power plant, which he said played a crucial role in supporting the country during the power crisis.

He lamented the loud silence of the National House of Chiefs on topical issues prevailing in the country upon his exit indicating traditional leadership as the last bastion of hope for the country and must not disappoint.

Togbe Afede XIV, was grateful to the former President and his entourage for the visit and recognising his contribution to the development of the country.

He said the development of the country required a collaborative effort, therefore, calculated steps should be taken to discontinue the winner takes all approach.

Togbe said the outbreak of the novel coronavirus had exposed the vulnerability of Ghana and other countries as the economies were not strong to support the citizenry in the crisis.

"That is why there is the urgent need to focus on the development of our country. We have done enough politics over the years, it is time the focus be shifted to our developmental needs," he said.

The former President was accompanied by his 2020 running mate, Professor Jane Naana Opku-Agyamang, Mr Asiedu, Nketia, General Secretary of the Party, Mr Samuel Ofosu Ampofo, National Chairman of the Party among others.

Hottest Photo Reports
Catch up with all the political quotes from our politicians.
Advertise here
More Headlines
ModernGhana Links
Ashantis like NDC; we will target 40% votes in 2024 – Kwabena Duffuor
You told Ghanaians we are not in normal times so why impose elegy? — Group questions Akufo-Addo
PHOTOS: Hundreds of workers stranded at Lapaz as commercial drivers begin strike
‘Don’t travel outside this month’ – Nana Addo ban Ministers and deputies who’re MPs
Akufo-Addo to launch 2021 Anti-Corruption Week
Kumasi fast losing its agrarian lands, farmers forced to plant in containers
My people have benefitted tremendously from your policies — Ya Na to Agric Minister
South African President describes travel ban over Omicron variant as apartheid
2022 Budget: Speaker Bagbin chickened out over Kevin Taylor insults
TOP STORIES