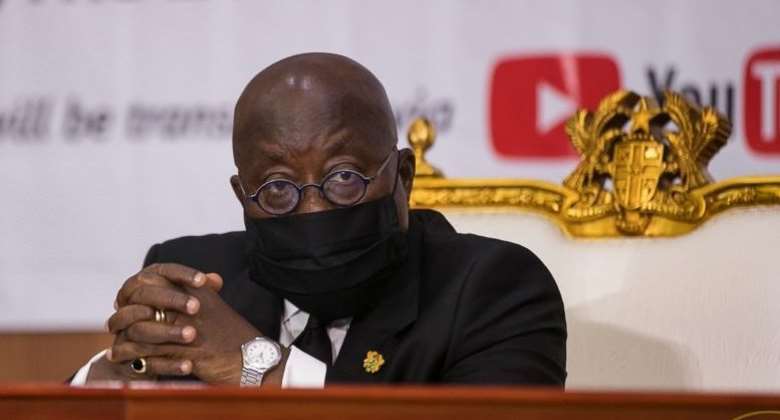 The aggrieved 499 law students who were denied admission, despite passing the 2021 Ghana School of Law entrance exam have appealed to President Nana Akufo-Addo to intervene.

The students said their supposed failure was a travesty of justice, a situation that should be corrected immediately.

At a press conference in Accra on Mo day October 18, they said “on 15th October, 2021, we petitioned the Office of the President, appealing to His Excellency to use his Executive authority to come to our aid, in our quest for justice and to vindicate our fundamental human rights as enshrined in Chapter 5 of the 1992 Constitution of our dear country. As we speak, we are yet to receive a response from the high office of the President.

We are nonetheless confident that President Akufo-Addo, who, for all intent and purposes, has proven to be a renowned human right lawyer and freedom fighter, would rise to the occasion and do justice to our legitimate grievances. We appeal to the President, who also happens to be a member in permanent good standing at the bar, to cause his official Representative on the GLC, the Attorney-General, Godfred Yeboah Dame Esq, who is clothed with powers under the Legal Profession Act, 1960 (Act 32), to order the General Legal Council and for that matter the Ghana School of Law, to comply with their own rules of engagement and within the confines of the law, by admitting the remaining 499 candidates who passed the entrance exams. This, respectfully, is not too much to ask for, Your Excellency. It is the reason why we voted for you, and we humbly beseech you to do exactly that,” the said.

Their statement added that “Even more bizarre is the fact that, most of us in the 499 group obtained higher marks than some of the admitted candidates in the 790 supposed passed list. For instance, how can you explain why a candidate who obtains more than 60% in an exam is deemed to have failed and therefore not eligible for admission whereas another candidate who obtains 50% in the same exams is deemed to have passed and therefore offered admissions? Such logic! This certainly can only be one of the wonders of the world, and can only happen in the lexicon of the Ghana School of Law.

“If this arbitrary and capricious exercise of discretionary power is not checked, we shouldn't be surprise if next year, the GLC tells us that candidates must obtain more than 70% in the entrance exams to be deemed to have passed. Well, like every well-meaning Ghanaian, we are unable to accept this travesty of justice, and we make a passionate appeal for the reversal of this manifest injustice, for the love of God and Country.

“It must also be emphasized that, the IEC/GLC and for that matter the Ghana School of Law has always maintained that, their inability to admit more students for the professional law programme has absolutely nothing to do with inadequate lecture facilities or staff. In other words, they have always told the whole world that the reason why they are unable to admit more candidates is that the candidates were just not passing the entrance exam (securing the minimum 50% pass mark) and that, they had always made provision for huge intake. “Indeed, when in 2019, 128 were said to have passed which development generated some eyebrow, the school responded that the Candidates just failed to cross the 50% pass mark, and that, the school had made provision for huge intake that year.

“For instance, a member of the GLC at the time, Joseph Kpemka Esq., who was then a deputy AG, informed the whole world, on Joy Fm Newsfile that, the GLC/GSL, in anticipation of huge intake that year, rented a lecture facility at the University for Professional Studies (UPSA) Accra. And so, according to him, the authorities were even disappointed that despite their commitment to increasing enrolment, the overwhelming majority of the candidates could just not secure the required 50% pass mark. Fortunately, this year, 2021, as many as 1,289 candidates passed the exams. This should be good news for the authorities as they can make use of the UPSA facility, and probably even rent more facility if need be. Why is the story rather different today? What is good for the 2019 candidates is certainly also good for us, the 2021 candidates.

“When in 2020, some 1045 candidates passed the entrance exams, they were all admitted owing to the ingenuity of the GSL, particularly its acting director, Maxwell Opoku-Agyemang, who introduced a triple track system. If in 2020, the GSL could be this ingenious and innovative, then in 2021 with the benefit of hindsight, the GSL under its current director, Kwesi Prempeh – Eck, has no excuse but demonstrate more ingenuity and innovation. We refuse to believe that the huge intake witnessed last year has anything to do with the general elections, because we trust our leaders.”

Some two thousand LLB candidates who sat for the 2020/2021 academic year Ghana School of Law 2021 Entrance Exams failed in the exams.

Students from the various law faculties across the country who sat for the exam, only 790 of them passed representing approximately 28% while the failure represents 72%.

The GLC, the body in charge of legal education in Ghana has come under fire for this development especially it applied a new requiring candidates to pass 50% in each of the two sections A and B in the exam, a rule did not exist prior to the examination.

Mr Kpebu stated that the GLC which is made up of best of the best lawyers in the country is aware that retrospective application of rules or orders have very limited space in Ghana hence, they should not have applied it in the examination.

Speaking on the Key Points onTV3/3FM on Saturday October 9 with Dzifa Bampoh, Mr Kpebu said “I am hoping that they will do the needful.

“…It is quite embarrassing but it is part of our development process so now that they are coming under a lot of heat I am sure they will do the needful.”

The GLC has been petitioned by the Student Representative Council of the Law School to relook into this matter.

Regarding the petition, Mr Kpebu said “The petition, as far as I understand was presented a few days ago so let us give at least a week then we will see whether they will do the needful because it is quite embarrassing.

“It is shocking that a candidate must pass both section A and B was not introduced before they went into the exams. For us as lawyers it is quite a bit tacky that the best of lawyers in the country will sit and then introduce the rule after the exams, it doesn't look tidy at all but because the petition is before them we will want to be a bit circumspect and expect that they do the needful.

“The best of the best sit on the GLC and yet this simple thing that we know, you can't make a rule after the event and ask that the rule should retrospectively affect the event, no. So far, in our constitution it is only when it comes to public finances that is when it is allowed that the government can spend ahead and then later go to parliament for a budget appropriation bill to be passed to make it legal .

“Besides that, it is not the norm to pass a rule after the event , so I am sure they will look at it otherwise it will make them look bad.”

For his part, a former Deputy Attorney General , Joseph Dindiok Kpemka, lamented the knee-jerk approach to resolving issues relating to the law school entrance examination that lead to mass failures.

According to him, there have not been concrete steps taken to resolving these issues that come up yearly.

Contributing to this development, Mr Joseph Kpemka Dindiok told Dzifa Bampoh on the Key Points that “I have had opportunity of serving the General Legal Council (GLC) as Deputy Attorney General , the nominee of the Minister of Justice and Attorney General . I have made my inputs on this matter.

“It is unfortunate, all we do is that when this issue comes up yearly, we make all the noise after a week or two, that is the end of it. We wait, it comes again the following year, we make noise, after a week or two, it goes. There are no concrete steps put in place to nip this in the bud once and for all as a nation.

“The conversation seem to be one of a knee-jerk reaction to the release of results rather than a long term lasting solution that ought to be found without delay in this particular matter.

“I have heard the students make their compliant. It is true, the majority of us lawyers today did not go through what they are going through , it is act probably because of numbers those days. I recall that when I finished my LLB progrmme , the published the results and I walked to the Law School and filled the form and took my admission letter, that was all that happened. There was nothing like entrance exams or interview.”

Some lawmakers and observers also criticised the GLC over this matter.

For instance, South Danyi Member of Parliament, Rockson Nelson Dafeamekpor 499 out of the 1289 law students who failed the entrance should have been admitted.

He said “A further release by the GLC of all exams results after public pressure would suggest that 1289 examinees met the minimum pass requirement of 50% in keeping with the known pass standard for all previous entrance exams conducted by the GLC.

“It is most bizarre therefore that 499 of the 1289 have not been considered eligible for admission into the GSL when indeed they scored a minimum of 50% or better.

“In attempt to explain this inconsistency of not admitting the 499 students, the GLC, through its director further released a notice on its Notice Board, setting out what clearly is an afterthought, and setting out an est post facto rationalization of the inconsistency. In the said notice, the director purports to set a previously unknown new standard of a pass of 50% in each of the two sections A and B in the exam.”

A former Director of the Ghana School of Law, Professor Kwaku Ansa Asare, also chastised the GLC for this development.

In the view of Prof Asare, the GLC lacks the competence to supervise any body to conduct entrance examination into the Ghana School of Law.

“Quite a number of them do not appear to understand and appreciate legal education. Most of them know next to nothing about legal education. The body, the General Legal Council, should have been scrapped soon after Ghana attained Republican Status.

“They should establish a National Council of Legal education to be made up of people who have the expertise,” Prof Asare said.

FIFA throws out SAFA’s protest case against Ghana after WC q...
1 hour ago