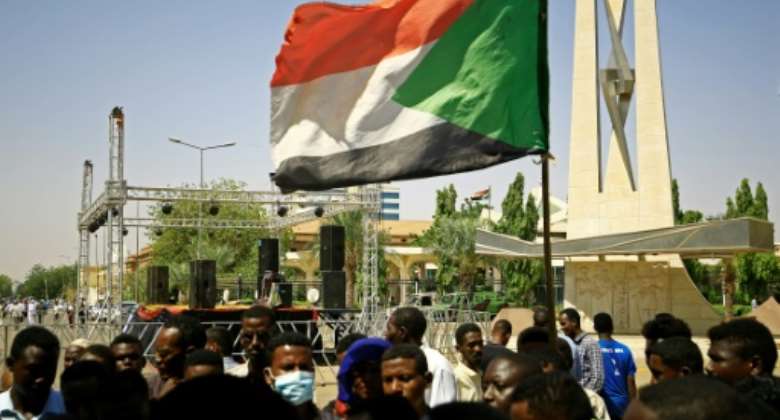 A Sudanese protester waves the national flag during a sit-in demanding the end to the interim government in Khartoum on Monday. By ASHRAF SHAZLY (AFP)

Sudan's government urged all political factions Monday to "refrain from escalating" unrest after police dispersed pro-military protesters on the third day of well-organised sit-ins in Khartoum.

Prime Minister Abdalla Hamdok, who gathered his cabinet for an "urgent" meeting, has called recent unrest the "worst and most dangerous crisis" of the country's precarious two-year transition since the fall of hardline ruler Omar al-Bashir.

The demonstrations come as Sudanese politics reels from divisions among the civilian and military factions steering the rocky transition since Bashir was toppled and jailed in April 2019 following mass protests.

"The cabinet stressed the importance of all parties to refrain from escalating the situation," a statement from Hamdok's office read.

On Monday, pro-military protesters marched to the prime minister's office and shouted "down with Hamdok", before they were pushed back by police firing tear gas.

"Riot police repelled an attempted assault on the seat of government," Khartoum state authorities said in a statement.

Protesters demanded the dissolution of the interim government, which is mired in both political and economic crises.

Sudan is run by a Sovereign Council, a military-civilian body that oversees the transition until elections slated for 2023, with the transitional government led by Hamdok, a former UN economist.

Demonstrations were organised by a splinter faction of the Forces for Freedom and Change (FFC), a civilian alliance which spearheaded the anti-Bashir protests and became a key plank of the transition.

The mainstream FFC bloc has called for rival counter demonstrations on Thursday.

Hamdok also formed a "crisis cell", the statement added, with a government source saying it includes two military figures, and two members each from the opposing political blocs.

The pro-military protesters began a sit-in outside the presidential palace on Saturday, with some travelling hundreds of kilometres (miles) across the vast country.

Ahmad Jumaa, 65, said he travelled more than 900 kilometres (570 miles) from Nyala in Sudan's western Darfur region, with one goal in mind -- to replace the transitional authorities with a "military government".

The protest adds to the challenges for the government, which last month said it had foiled an attempted coup. It has also faced unrest in the east of the country, including a blockade of its main port.

The government on Monday said it also promised to find "just solutions" and "end the economic abandonment" of the resource-rich but impoverished east.

Unlike many previous protest camps in the past, recent pro-military demonstrations are well run and supported, political observers and those taking part say.

"The uprising that toppled the dictatorship (in 2019) was self-financed," political scientist Otham Merghani told AFP.

In contrast, "this sit-in is orchestrated by an official party", Merghani said, adding that "some have doubts that this party is financing it".

At the protest camp on Monday, volunteers distributed trays of food, while others helped pitch tents for those arriving from long distances.

"We have food and drink," said Mohammed Issa, a 57-year-old farmer from Gedaref, some 350 kilometres southeast of Khartoum, as patriotic songs blasted from loudspeakers. "Everything is very well organised."