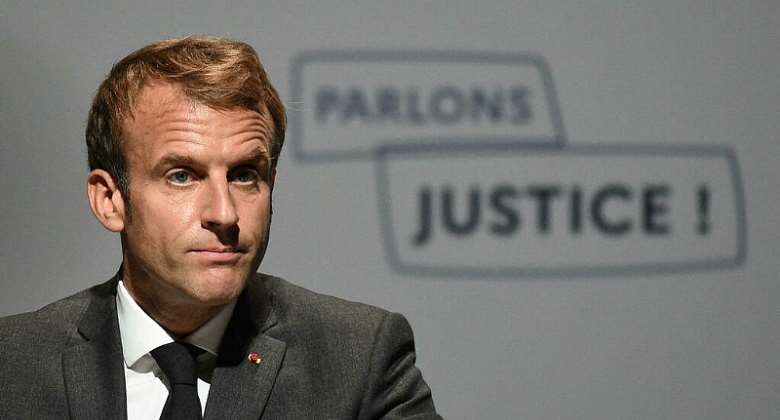 French President Emmanuel Macron on Monday announced moves to overhaul the country's justice system, long criticised for being too slow and too lax. Magistrates unions, however, aren't buying it – accusing Macron of doing a political dance in the lead up to presidential elections.

The so-called General Assembly of Justice will be responsible for putting forward reforms to streamline the justice system from 2022 and beyond.

The assembly is to be made up of working groups spanning the entire ecosystem of French justice: judges, prosecutors, court clerks, auxiliaries, lawyers, bailiffs, prison guards and others.

Alongside Justice Minister Eric Dupond-Moretti, Macron unveiled the reform plans in a speech in Poitiers, western France, in front of an audience of lawmakers, law enforcement officials, law students and ordinary citizens.

'Enlivened' debate
The assembly, or Etats généraux de la justice, is to “structure and enliven” debate surrounding issues such as civil justice, criminal justice, economic and social justice, prison justice, rehabilitation and the evolution of statutes.

It's a measure that would define the legacy of Macron's second five-year term, should he seek and win re-election during next April's presidential polls.

"We have two objectives: to renew the civic pact between the nation and justice, and to guarantee the effectiveness of the public service of justice,” Macron said on Monday.

The initiative comes after France's two most senior judges said they were worried about the "systematic blaming of the justice system", often by police unions and political leaders.

An independent commission chaired by Jean-Marc Sauvé – also president of a damning commission of inquiry into child sexual abuse in the French Catholic Church – will steer the work of the assembly and guarantee its independence.

"The credibility of this exercise will allow whichever government is in power in 2022 to follow through with the assembly's proposals,” the Elysée Palace said in a statement, adding that no limit was being given to the scope of ideas that may be put forward.

"It is a carte de blanche that the President wishes to give.”

'Pure display'
However several magistrates' unions said the initiative was being launched too late in Macron's term to be taken seriously.

"It's pure display,” Sarah Massoud, national secretary of the Syndicate of Magistrates told RMC radio. “We expect a lot of froth, a lot of political communication, which is for us tiring and even quite contemptuous.”

Meanwhile Cécile Mamelin, vice-president of the Union of Magistrates, told France Info radio: “It isn't possible to do any serious reform work during the pre-election period … We have been informed of nothing and we are under no illusions about the final result.”