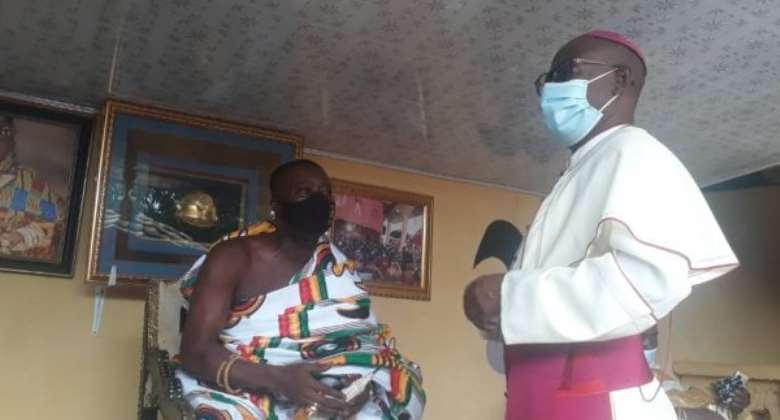 Nana Okoh Agyeman Boakye II, the Chief of Techire in the Tano North Municipality on Sunday threatened to banish any individual or group who engages in LGBTIQ activities in the area.

The LGBTIQ (Lesbian, Gay, Bisexual, Transgender, Queer and Intersex) activities, he explained was not only unfriendly to the Ghanaian culture and religious values, but remained devilish and unacceptable in any godly society.

The chief gave the threat when Most Reverend Peter Kwaku Atuahene, the Catholic Bishop of Goaso Diocese paid a courtesy call on him at Techire in the Ahafo Region.

He said majority of the populace had already demonstrated strong abhorrence and displeasure to the LGBTIQ activities in the country, saying that alone should inform Parliament to pass the bill in the supreme interest of Ghanaians.

Nana Boakye II also advocated for an open and televised voting process by Parliament towards the passage of the Anti-LGBTIQ Bill.

This would enable Ghanaians to know the individual Members of Parliament (MPs) positions on the bill and the LGBTQ .

Nana Boakye II indicated the MPs were elected to represent the interest of their constituents, saying an open voting process on the bill before Parliament would make the populace well-informed about their MPs and that would greatly influence their voting pattern in the next parliamentary elections.

Any parliamentary attempt to disapprove the bill would create unnecessary confusion and disturb national peace and stability, he said.

"The Techire area strongly supports the promotion of proper human sexual rights and Ghanaian family values but does not support any activity of the LGBTQI ," the Chief added.

On his part, Most Rev. Atuahene said the Roman Catholic Church was not in any position to support activities of the LGBTIQ , saying the Ghana Catholic Bishops' Conference maintained its stands on the passage of the bill.