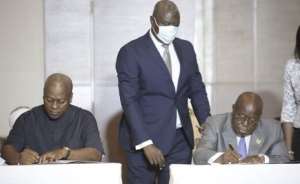 Former President John Mahama has said comments by President Akufo-Addo that he will handover to the New Patriotic Patriotic (NPP) is reckless since the people decide who they want as their leader.

Speaking on Global FM in the Volta Region on his Thank You tour, the 2020 flag bearer of the main opposition National Democratic Congress (NDC), said the actions of the Akufo-Addo government has undermined the democratic dispensation of the country to the point that it is trickling down to the local level.

“I was looking at something this morning [about the] Municipal Chief Executive [nominee] for Cape Coast, and they said 77 votes out of 63 [were cast]. The people there assembled were 63 and then somebody was saying that some people took some of the ballot papers and run away with them. I mean, what kind of democracy is NPP fostering in this country?” Mr Mahama wondered.

Mr Mahama quoted the Director of Operations at the presidency as having said: ‘If you get power, you shouldn’t hand it over to anybody’.

“What do you mean by that? It’s the sovereign will of the people who elect you to serve but when arrogance of power sets in, then you hear people speak so carelessly, recklessly”, Mr Mahama noted, adding: “I think it’s most unfortunate”.

He said: “If you listen to some of them [NPP people], the arrogance of power has got to them and he [Lord Commey] was quoting the president. He said the president says: ‘He’s going to hand over to an NPP president’”.

“It’s not your will”, Mr Mahama pointed out, explaining: “It is God’s will and the will of the Ghanaian people”.

“I could have made my mind that I wanted to hand over to an NDC [person] but it is the will of the people”, Mr Mahama added.

“If the people decide, you must agree and the point is – I don’t know where he’s coming from – but I mean statements like this are reckless and I think that when they make them, the president is happy with them and, so, he pats them on the back”.

“You just fire and kill people and then after that Ejura, look at what happened”, he mentioned.

“And all these things, these people get away with it – all these masked people in all those kinds of uniforms and clothes and things – they don’t get punished for what they do and, so, where will the next incident be and won’t they pull the triggers again because they are not being punished for what they do and, so, impunity sets in and that’s what’s happening. And, so, it’s unfortunate that comments like these are made but they reflect the comments of the leader”.

“When you say: ‘All die be die’, then you’ll have people like Lord Commey come and say reckless things like this. What he said was against our Constitution; ‘He won’t hand over power’. How can you not hand over power?”