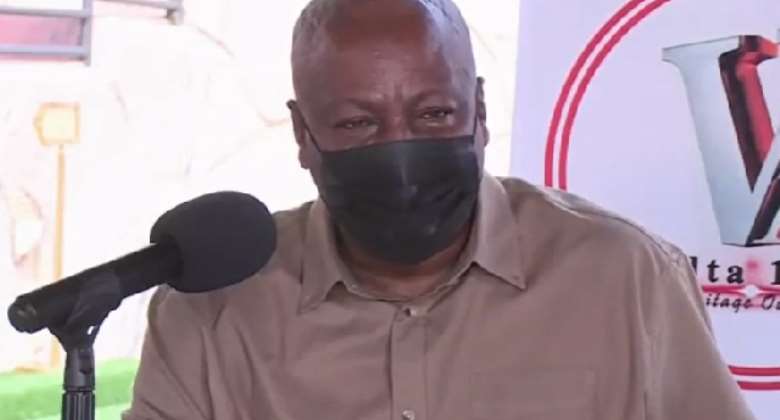 Former President Mr John Dramani Mahama has expressed gratitude to the people of the Volta Region for the votes he garnered in the 2020 general elections.

According to Mr Mahama, the region, which is a stronghold of the NDC, did not disappoint him.

He said the region added an additional 113,000 votes to the party’s votes.

The former President noted that the NDC would have won all the 18 constituencies in the region had it not been the “arm twisting” that took place during the polls.

Mr Mahama said these in an interview on Global FM on Monday, 18 October 2021, as part of his ‘Thank You’ tour in the Volta Region.

“I want to say thank you to everybody in the Volta region; you did not disappoint us.

“Despite all the intimidation that took place, despite the locking of the borders, despite bringing soldiers to intimidate our people during the registration and all, if you look at the votes in the Volta region, it helped to increase us from where we were at about four-point-something million to almost six-point-something million and in Volta region alone, we got 113,000 additional votes so you didn’t disappoint us,” said Mr Mahama.

The former president added that: “There are 18 constituencies in the region, you gave us 17 and I know that even Hohoe we would have won but for the arm twisting that took place”.

“As we sit here the people of Santrokofi, Akpafu Lolobi, and Likpe (SALL) have no representative in parliament and all these were carefully designed to take that constituency from us”.

He reiterated his gratitude to the people, saying “we thank the people of the Volta region, you didn’t disappoint me, I want to thank you for the support you’ve given me and I’m sure that by God’s grace we live to fight another day”.

Latest Photo Reports
Catch up with all the political quotes from our politicians.
Advertise here
More Headlines
ModernGhana Links
Problematic e-Levy will lead to double taxation; it could undermine digital economy – Duffuor
The Clerks of Parliament walked me to my reserved seat in the Chamber but I opted for the public gallery — Asiedu Nketia
You’ve always made me proud as your wife – Lordina celebrates Mahama at 63
Court issues warrant for arrest of Xavier Sosu for 'disrespect'
Swiftly intervene to pull the country together amid majority, minority impasse – Adongo to Akufo-Addo
My presence in Parliament gingers, inspires NDC MPs – Asiedu Nketia
2022 budget: We're shocked, disappointed in Majority attacks on Bagbin – NDC caucus to majority
The days where you had majority to bully minority are over – Haruna Iddrisu jabs NPP MPs
Mahama clocks 63 today
TOP STORIES