A year after mass protests, Nigerian police brutality has 'resumed' 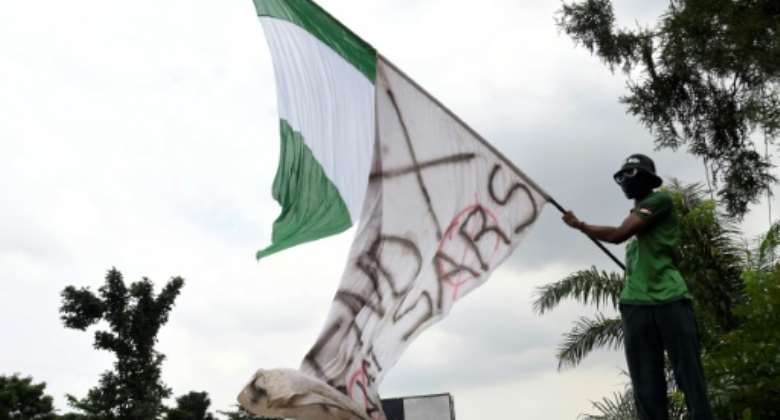 The #EndSARS movement was first a campaign to end the notorious Special Anti-Robbery Squad, but snowballed into wider protests against bad governance. By PIUS UTOMI EKPEI (AFP)

Monsurat Ojuade had just turned 18 when she was killed by a police officer, her sister Omolara said in a trembling voice.

News of her death, during a raid in her neighbourhood of Nigeria's Lagos last month, shocked many in a country preparing to commemorate the first anniversary of EndSARS, a protest movement against police brutality that rocked major cities in the south.

The protests came to a grinding halt after October 20, 2020, the date of a brutal crackdown on peaceful protesters at the Lekki tollgate, the epicentre of the demonstrations.

Monsurat's death in September was for many a sign that police brutality has continued in Africa's most populous country.

And for the youth that mobilised massively for the first time in decades, her death was also a reminder that their demands for change have not been heard, and pervasive impunity and corruption still exists.

"It was a Friday night, we were about to lock the shop. Monsurat saw some guys running," said her sister Omolara Ojuade, speaking to AFP by phone.

"We were scared... someone started hitting the door -- he didn't identify as a policeman -- and he shot through the gate at Monsurat," the young woman recalled.

The officer in charge was suspended and is facing trial for murder but for the Ojuade family, much more is needed.

"They are not giving them (police) proper training," said the sister. "As a police officer you cannot just come to someone's gate and start shooting."

After it snowballed into wider protests against bad governance, the authorities suspended the unit and promised reforms.

But the country's youth were sceptical and continued to protest -- until the Lekki crackdown.

A year later, many wonder if their efforts had any impact.

The September killing of Monsurat Ojuade by a police officer in Lagos shocked many on the country. By PIUS UTOMI EKPEI (AFP)

"Nothing has really changed," said Amnesty International researcher Damian Ugwu. "SARS may have been disbanded, but there were only cosmetic changes.

"All the things people complained about, extortion, extrajudicial killings, torture, ill-treatment, all those things are still within the police force," said Ugwu.

Police training was given, but there were no in-depth reforms, and security forces remain under-resourced and poorly paid.

Harassment from corrupt police officers on the streets of Lagos has resumed, according to Femi, a taxi driver.

"You have to give them money, or you have problems with them."

Outside the economic capital, some security agents do not wear an official uniform and use clubs or whips to threaten drivers, an AFP journalist witnessed.

After last year's protests, police violence initially "decreased" said Rinu Oduala, one of the leading figures of EndSARS, but in recent months it "resumed with more brutality than ever before".

The 22-year-old has launched Connect Hub, an NGO that works to document police violence, "to show the world why we are fighting".

"We have in the space of a month, close to 100 cases reported. We get cases ranging from extrajudicial killings to extortions, harassment, profiling, arbitrary arrests, rape and other crimes committed by the Nigerian Police."

Neither the government nor the police responded to AFP's request for comment on her claims.

If police violence persists, it is mainly because of "impunity and (that) the government has not addressed that," said Amnesty's Ugwu.

"Few policemen have been brought to justice," he said. "Most of the promises made by the police and the government have not been held."

And in what is seen by many as a snub to the movement, the management of the company in charge of the Lekki tollgate, where the army shot at thousands of protesters on October 20, were never taken to court.

The 29-year-old was at the tollgate when "the army came and shot on us (when) we were raising the Nigerian flag".

According to Amnesty International, at least 10 people died.

The army later said it had fired only blanks and shot in the air.

One year on, the judicial panel meant to investigate what happened has yet to publish its conclusions, and the army has failed to show up on several occasions.

"I don't expect anything from the government," said Onileowo. "God will surely punish those people."

COVID-19: Government to announce more measures ahead of Chri...
6 minutes ago