Alleged money launderer close to Maduro defiant after extradition to US

By Javier TOVAR with Gerard MARTINEZ in Miami
Africa 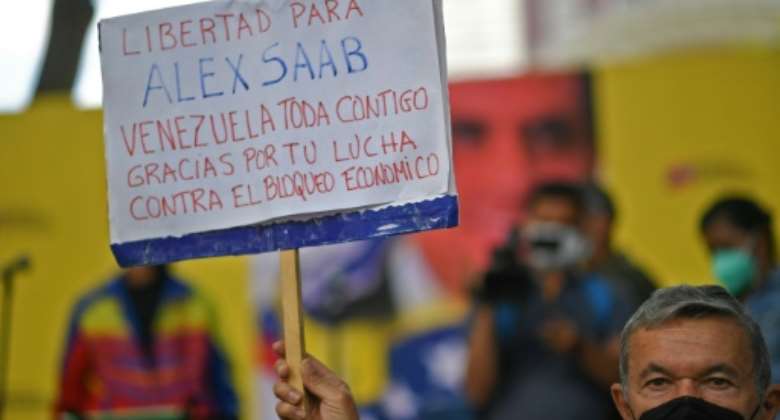 A man hold a sign reading "Freedom for Alex Saab. All of Venezuela is with you. Thank you for your fight against the economic blockade," referring to Colombian businessman Alex Saab, who was extradited to the United States. By Federico PARRA (AFP)

A fugitive businessman accused of acting as a money launderer for Venezuelan President Nicolas Maduro's regime said Sunday he would not collaborate with the United States, a day after he was extradited to the country from Cape Verde.

Maduro said Sunday evening in a televised address that Alex Saab's extradition on Saturday was "one of the most ignoble and vulgar injustices that has been committed in recent decades."

Authorities had held a rally in Saab's support earlier Sunday in Caracas, during which his wife, Camilla Fabri, read aloud a letter from him.

"I will face my trial with total dignity," Saab said in the letter. "I want to be clear: I do not have to collaborate with the United States. I have committed no crime.

"I declare that I am in full possession of my means and I am not suicidal, in case I am murdered and then (they) say that I committed suicide."

Saab, a Colombian national, and his business partner Alvaro Pulido are charged in the United States with running a network that exploited food aid destined for Venezuela, an oil-rich nation mired in an acute economic crisis.

They are alleged to have moved $350 million out of Venezuela into accounts they controlled in the United States and other countries. They risk up to 20 years in prison.

The US Justice Department said in a statement that Saab was due to appear in court in Florida on Monday and expressed "admiration" to authorities in Cape Verde for their help in the case.

Saab, who also has Venezuelan nationality and a Venezuelan diplomatic passport, was indicted in July 2019 in Miami for money laundering, and was arrested during a plane stopover in Cape Verde off the coast of West Africa in June 2020.

Camilla Fabri, the wife of Colombian businessman Alex Saab, who was extradited to the United States, speaks during a demonstration demanding his release, in Caracas, Venezuela, on October 17, 2021. By Federico PARRA (AFP)

Venezuela's opposition has described Saab as a frontman doing shady dealings for the populist socialist regime of Maduro.

Colombian President Ivan Duque on Saturday praised Saab's extradition, calling it a "triumph in the fight against the drug trafficking, asset laundering and corruption" that he says have blossomed under Maduro's government.

Venezuelan opposition leader Juan Guaido, who is recognized as the country's acting president by the United States and more than 50 other countries, also welcomed the move.

"We Venezuelans, who have seen justice kidnapped for years, respect and celebrate the system of justice in democratic countries like Cape Verde," he tweeted.

A man walks past a poster demanding the freedom of Colombian businessman Alexander Saab, who was extradited to the United States, in Caracas, on October 17, 2021. By Federico PARRA (AFP)

In a development not officially linked to the Saab extradition, shortly after the news broke, six former oil executives under house arrest for corruption in Venezuela were taken to an undisclosed prison.

They had worked for Citgo, a US-based subsidiary of the state oil company PDVSA. Five of the six hold US citizenship and the other is a permanent resident of the United States.

"American detainees in Venezuela are now being used as political pawns," said US Democratic Party heavyweight Bill Richardson, who led an unsuccessful mission to Venezuela to seek the executives' release last year.

Richardson has managed international negotiations for a number of high-profile American detainees.

"We will continue to press for their release," he said.

Cape Verde agreed last month to extradite Saab to the United States, despite protests from Venezuela, which said he had been abducted by Washington.

A woman holds a sign with the image of Colombian businessman Alex Saab, who was extradited to the United States, during a demonstration demanding his release in Caracas, Venezuela on October 17, 2021. By Federico PARRA (AFP)

"Venezuela denounces the kidnapping of the Venezuelan diplomat Alex Saab by the government of the United States in complicity with the authorities in Cape Verde," the Caracas government said in a statement.

The speaker of Congress, Jorge Rodriguez, said the government would not attend the fourth round of talks with the opposition due to start Sunday in Mexico City "as a deep expression of our protest against the brutal aggression" against Saab.

Rodriguez leads the government delegation for the negotiations and had hoped to make Saab one of its members until his arrest.

Roberto Deniz, a journalist who has covered Saab's story for the Venezuelan investigative news site Armando.info, said last month that the regime in Caracas was desperate to get him released.

"It is clear that there is a lot of fear, not only because he may reveal information about bribes, about the places where money was moved and the inflated pricing," Deniz said, but also because Saab "was the bridge for many of these deals that the Maduro regime is beginning to carry out with other allied countries."