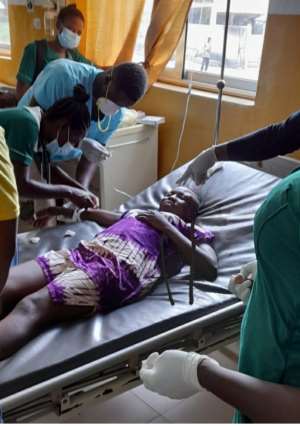 A 16-year-old girl is currently receiving treatment at a hospital after she was allegedly butchered by a normadic herdsman at Yipala, a community in the West Gonja Municipal of the Savannah Region over dam water.

The sad incident occurred on Sunday, October 17, 2021 when the victim and her colleagues went to the crime scene to wash their clothes.

Reports say the unidentified culprit went there with his cattle to drink from the dam but was asked by the young girl and her colleagues to pause until they are done washing their clothes because the cattle will muddy the water.

The culprit , got incensed and in a heated argument, the Fulani man inflicted a cutlass wound on the head of the victim and fled the scene into the bush.

The young girl has since been admitted at the West Gonja Catholic hospital in Damongo for medical attention.

Meanwhile, parents of the victim as at the time of going to press were yet to lodge an official complaint at the Damongo Police Command.

However, ModernGhana News can report that the victim is currently responding to treatment at the health facility.