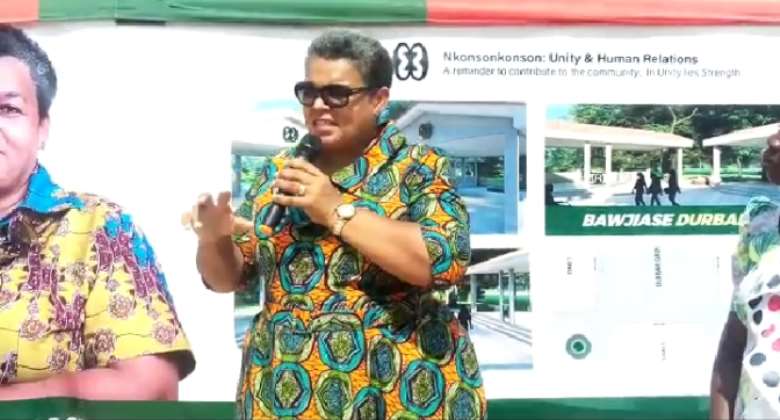 Member of Parliament (MP) for Awutu Senya West Hon. Gizella Tetteh Agbotui says, she's committed to fulfill promises made to her constituents in the heat of the 2020 election campaign.

She said this during a sod cutting ceremony of a durbar ground for the people of Awutu Bawjiase.

The MP, speaking at the ceremony to commence the construction of the durbar ground said, the project is part of her campaign promises made during her engagements with Chiefs of Bawjiase in the 2020 election campaign.

The project, which comes at a cost of Ghc650,000, according to her will be financed by the MPs common fund, donations and personal funds from her office as MP for the area.

"We are cutting sod for this project today, because it has been a longtime wish of the chiefs, so the moment I won the elections, I decided to take it up and here we are today.

"The project will commence this year with other funds and hope the common fund comes in time to enable its continuation and subsequently complete it."

She noted that the theme for the project is 'Nkonsonkonson' to wit "Unity and Humanity".

According to her, the durbar ground will consist of four well expanded pavilions, car park and drains.

Omanhene of Awutu Bawjiase, Nai Kwaku Sardu II, in his remarks expressed his profound gratitude to the MP for taking steps to fulfill the appeal by the traditional council.

He further appealed for the establishment of a fire service station at Bawjiase.

He explained that fire stations closer to Bawjiase are miles away indicating that having a fire station at Bawjiase will curb future fire outbreaks in the area.

In response to the request, the MP said she has engaged authorities of the Ghana National Fire Service (GNFS) and has assured to undertake an assessment to determine the veracity for the establishment.

The MP after the sod cutting moved to a nearby community called 'Kawanopado' to inspect a newly constructed pipe borne water for the people in the area, to formerly pave way for it usage after years of lack of portable water.