Bawumia's campaign allegedly being financed by NDC to kick anti-Bawumia executives from office? 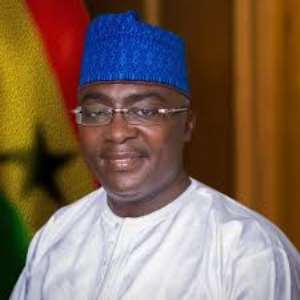 News emanating from the camp of Dr. Mahamudu Bawumia, Vice President of the Republic has it that, plans are being hatched to sideline all anti-Bawumia executives from branch to regional level positions of the New Patriotic Party (NPP).

And this comes with financial assistance from some NDC gurus, Vice Chairman of the Ashanti Regional branch of the NPP, Mr. Kwabena Nsenkyire was heard assuring some party members in a viral leaked video on social media.

This comes on the heel of ensuring victory for the Vice President in the next NPP presidential elections.

According to him, the move is to ensure the Vice President contest unopposed in the next NPP presidential candidate elections.

In effect, executive positions at various levels of the party will be dedicated to loyalists of Bawumia, whilst anti-Bawumia groups are kicked out.

Mr. Kwabena Nsenkyire, believed to be the regional campaign manager for Dr. Bawumia, who doubles as the Ashanti Regional boss of NADMO, alleged that some bigwigs in the National Democratic Congress (NDC) are secretly funding the campaign of the Vice President to contest the flagbearer position of the NPP.

"I know some NDC people who are willing to support Bawumia," he said in the video.

This is the latest revelation which feeds into the perception that the NDC have managed to have long and manipulating hands in the NPP to ensure that John Mahama meets Dr. Bawumia who many political analysts have described him as a walkover for the NDC in the 2024 general elections.

It is alleged, that the Adenta NDC MP, Hon. Adamu Ramadan, who happens to be a brother to the second lady, Hajia Samira Bawumia was helped by the Vice President and his wife to overthrow Hon. Yaw Boaben Asamoah, the former NPP MP for Adenta.

Mr. Alan Kojo Kyerematen, Minister for Trade and Industry, has been touted by party faithful as a potential candidate to lead the NPP party in the 2024 general elections.

However, these "political tactics" from the camp of the vice president in effect is to render it invalid.

Mr. Fred Oware, Chief of Staff at the Office of the Vice President has been known in recent times to be a supporter to Dr. Bawumia's presidential bid after disclosing to Citi News at the party's Greater Accra Regional delegates conference, the intention of Dr. Bawumia to contest the presidential elections come December, 2023.

“If you read the papers, it’s in the papers that he is one of the frontrunners in contesting but the time hasn’t come yet so I think it will be premature for us to engage in that conversation. When the time comes he will make public what his intentions are,” the Chief of Staff at the Office of the Vice President told Citi News.