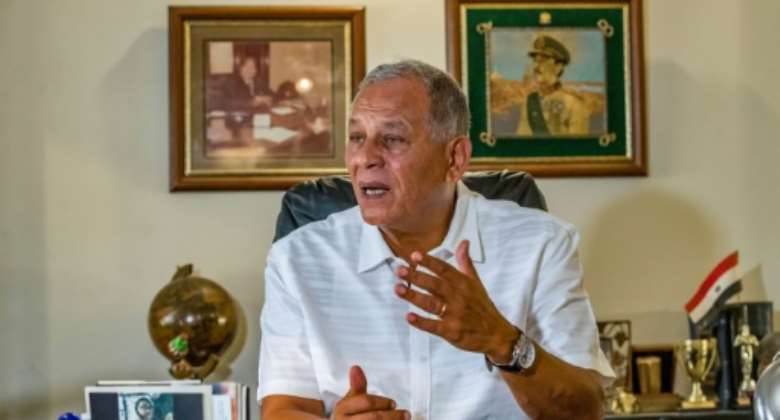 Mohamed al-Sadat, nephew of former Egyptian president Anwar al-Sadat, speaks during an interview with AFP at his office in the capital Cairo. By Khaled DESOUKI AFP

The fate of dissidents languishing in Egypt's prisons has long been under scrutiny, but one veteran is leveraging his political prowess in a bid to have them released.

Mohamed al-Sadat, 66, nephew of former president Anwar al-Sadat, the first Arab leader to strike peace with Israel, has long been a fixture of Egypt's political scene.

Now, he has become an unofficial negotiator advocating on behalf of figures imprisoned under the uncompromising administration of President Abdel Fattah al-Sisi.

"Dialogue with the state's institutions isn't just a one-man job, there are many others in close contact... but lately we've been successful in using a language that is being listened to," he told AFP in his plush office in an upscale Cairo suburb.

"This has been effective in some cases (of political prisoners) being re-examined," he said.

Forty-six prisoners were freed in July, including prominent activists such as rights lawyer Mahienour el-Massry.

But as many as 60,000 political prisoners are serving time in Egyptian jails, according to human rights defenders.

He has since overseen a sweeping crackdown on dissent.

But Sadat is less concerned about the conditions that led to their arrest than with securing their release.

"There's a lot of work that goes on behind the scenes in these security agencies where they undertake an examination of specific cases that we've raised, whether from a humanitarian or legal perspective," he explained.

With a portrait of his uncle, a Nobel laureate for the 1979 Egypt-Israel peace treaty, gazing down on him, Sadat was careful not to appear too critical of Sisi's human rights record.

He insisted that on-off pressures imposed by US President Joe Biden's administration have not influenced Egypt's willingness to improve its often condemned record on human rights.

"I don't agree that it (reform efforts) all stems from international pressures or a new US administration, that's not really appropriate to say," he maintained.

Sisi enjoyed a close working relationship with former US president Donald Trump who said the Egyptian leader was doing "a fantastic job in a very difficult situation", in reference to counter-terrorism and regional instability.

But Biden kicked off his term this year by vowing no more "blank checks" to Sisi.

However, with Cairo's critical role in brokering a ceasefire between the Palestinian Islamist movement Hamas and Israel after fighting broke out in May, ties with Washington have significantly warmed.

Leading an "International Dialogue" delegation comprised of lawmakers and media personalities to Washington last week, Sadat went on a "charm offensive", according to one attendee of the meetings.

"Sadat's not the boss. He is there as a figurehead or elder statesman," the source, who preferred to remain anonymous, told AFP.

"Maybe Sisi wants to get his DC invitation and this is the way," the participant added.

'Man of the hour'

Sadat, who once mulled a presidential run in 2018 against Sisi, describes himself as an "honest broker" and "messenger" but not the decision-maker.

"We're told by judicial officials that some inmates will be released after looking over their case files again. We then tell their families. That's the process in a nutshell," Sadat said.

For one former detainee unable to leave Egypt because he is on a no-fly list, Sadat's role has been crucial in negotiating his case with the interior ministry.

"He's the man of the hour really when it comes to human rights."

Appointments of deputies of constituency executives incohere...
51 minutes ago