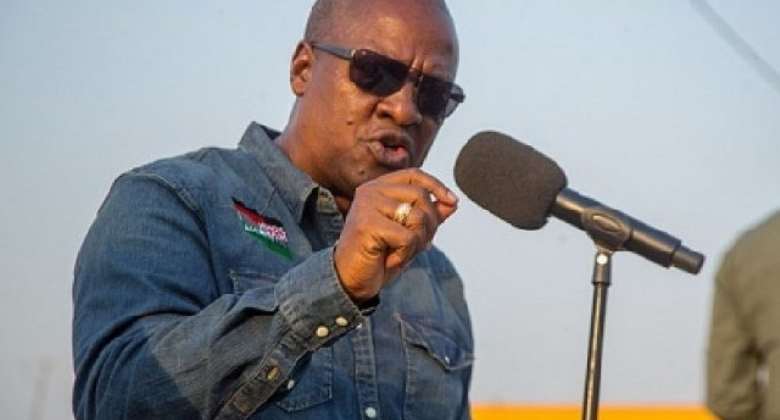 The 2020 flag bearer of the main opposition National Democratic Congress (NDC), says the deal will be bad for the youth because it will mean “mortgaging the future of the youth”.

According to the former president, the Agyapa deal is outright inconsiderate because it is a plan to mortgage the future of the country and Ghana's youth to fund President Nana Akufo-Addo’s present-day desires.

Mr Mahama told Cape 93.3FM in a recent interview during his Thank You tour of the Central Region that: "They [Akufo-Addo government] are mortgaging Ghana for everything”.

“They have sold everything for loans; now, they don't have anything to sell any more”, so, “it is our gold that is left; that is the Agyapa they want to do”.

“They have settled on the windows to sell. That is our gold, which they want to sell this time. They want to use that to go and collect over one billion dollars", Mr Mahama added.

He said the government has always received a 10% stake as gold royalties, which the Akufo-Addo government is bent on mortgaging for loans to spend today.

The former president singled out the President's cousin, Mr Ken Ofori-Atta, who is also the Minister of Finance, and accused him of being a happy participant in the “abuse” of the country’s mineral resources because his company always gets a percentage from the loans raised.

In Mr Mahama’s view, this government has benefited and accrued the most revenue from Ghana’s resources but there is nothing to show for it in terms of the development and the living standards of the people.

He observed that President Akufo-Addo, through his cousin, has mortgaged the Energy Sector Levy and the GETFund for many years, which he says imposes the burden of payment on the youth, who would be paying the debts for many more years to come.

"Even though the ESLA bond we brought was supposed to be for five years, today the last ESLA bond they did they have extended it to between 20 and 30 years.

“It means our children and our grandchildren will continue paying the loan until beyond 2030”, he explained.

He disclosed, “GETFund has been mortgaged for the next 15 years. This means all contributions we pay for GetFUND will only go toward paying the loan and not for anything else.

Mr Mahama, therefore, warned: "If we don't halt this trend the government appears set on, it will get to a point where we can no longer pay our debts."

Latest Photo Reports
Catch up with all the political quotes from our politicians.
Advertise here
More Headlines
ModernGhana Links
Rawlings given posthumous lifetime award
Mahama signs Capt. Kojo Tsikata's book of condolence
Problematic e-Levy will lead to double taxation; it could undermine digital economy – Duffuor
The Clerks of Parliament walked me to my reserved seat in the Chamber but I opted for the public gallery — Asiedu Nketia
You’ve always made me proud as your wife – Lordina celebrates Mahama at 63
Court issues warrant for arrest of Xavier Sosu for 'disrespect'
Swiftly intervene to pull the country together amid majority, minority impasse – Adongo to Akufo-Addo
My presence in Parliament gingers, inspires NDC MPs – Asiedu Nketia
2022 budget: We're shocked, disappointed in Majority attacks on Bagbin – NDC caucus to majority
TOP STORIES