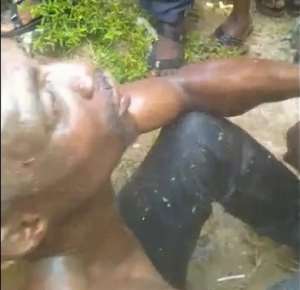 Residents of Wawase in the Afigya Kwabre South District of the Ashanti Region witnessed an ugly spectacle of two adult men and another killed by a palm wine tapper, Kojo Dada, age 45.

The suspect, popularly known as Desco reportedly confessed to the crime of killing one Kofi Banahene, age 48, on Saturday, October 9, 2021.

As if that was not enough, the palm wine tapper was alleged to have butchered two elderly persons D. C. Kwakye, age 80 and Agya Nkrumah, age 85.

At the time of going to press, Kojo Dada was arrested by the townsfolk and handed over to the Ankaase Police to assist in their investigations.

The three bodies have been deposited at the morgue pending autopsy.

According to the Assemblyman for the area Hon Andrews Mensah and a local reporter Nureedin Ishmael, the suspect on Friday, October 8, 2021, was said to have lured Banahene, who was his father's intimate friend into the bush and killed him.

The townsfolk mounted a search to find Banahene but to no avail.

On the following day Saturday, October 9, 2021, the suspect was again caught killing two elderly men in their rooms with a cutlass whiles they were asleep.

Sources in the village said a certain woman who saw the suspect in the killing spree raised an alarm. The suspect attempted to also kill the woman but the quick intervention of the townsfolk had him arrested, beaten to pulp and later handed over to the police.