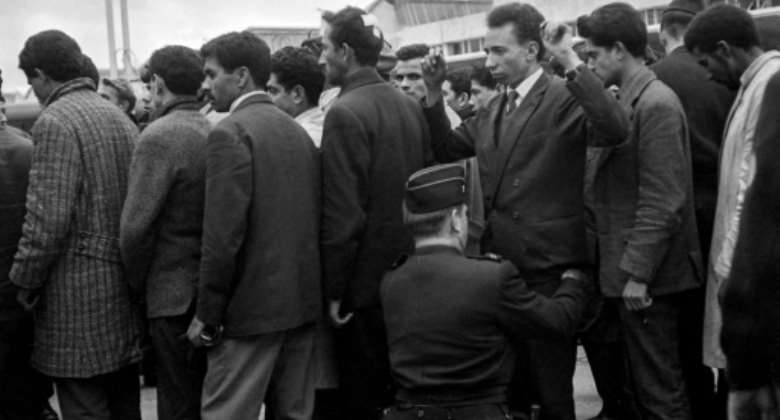 Algerians arrested during the demonstration in Paris on October 17, 1961 are searched before boarding a plane bound for Algeria. By - (AFP)

President Emmanuel Macron on Saturday will become the first French head of state to take part in commemorations of the massacre by Paris police of protesters at a rally 60 years ago against France's rule in its then-colony Algeria.

The events of October 17, 1961 were covered up for decades and the final death toll remains unclear. But many historians believe it could amount to several hundred.

The rally was called in the final year of France's increasingly violent attempt to retain Algeria as a north African colony, and in the middle of a bombing campaign targeting mainland France by pro-independence militants.

On Saturday, one day ahead of the formal anniversary, Macron will take part in a memorial ceremony for the victims at a park on the Paris outskirts from 1330 GMT.

Maurice Papon, who was Paris police chief at the time of the 1961 protest and was later found to have collaborated with the Nazis in WWII. By - (HARCOURT/AFP)

A major question is whether he issues a formal apology for the actions of the Paris police that day or expresses regret, as the president seeks to carve out a modern relationship with France's past.

The Paris police chief at the time, Maurice Papon, was later found to have collaborated with the Nazis during World War II.

The Elysee said the ceremony would take place in the presence of relatives of the victims, civil society activists who have campaigned for recognition of the massacre and veterans for Algeria's struggle for independence.

Emmanuel Macron is the first French president born in the post-colonial era. By Ludovic MARIN (POOL/AFP)

Activists are hoping Macron, the first president born in the post-colonial era, will go further than his predecessor Francois Hollande, who acknowledged in 2012 that protesting Algerians had been "killed during a bloody repression".

Campaigners want an apology, reparations for the victims or recognition that the repression constituted a state crime.

The 1961 protests were called in response to a strict curfew imposed on Algerians to prevent the underground FLN resistance movement from collecting funds following a spate of deadly attacks on French police officers.

Some of the worst violence occurred on the Saint Michel bridge near the Notre-Dame cathedral where witnesses reported seeing police throwing Algerians into the river Seine where an unknown number drowned.

"There was a state cover-up, a state lie. There were government statements from the morning of October 18 that sought to incriminate the FLN and the Algerians," historian Emmanuel Blanchard told AFP.

Macron, who is expected to seek re-election next year, may be wary about provoking a backlash from political opponents or the French police in his comments.

His far-right electoral opponents, nationalists Marine Le Pen and Eric Zemmour, are outspoken critics of efforts to acknowledge or show repentance for past crimes.

French historian Benjamin Stora presented a report earlier this year in which he urged a truth commission over the Algerian war. By JOEL SAGET (AFP)

Another complication is an ongoing diplomatic row between Paris and Algiers fuelled by comments attributed to Macron describing the country as ruled by a "political-military system" that had "totally re-written" its history.