Kolbe marvels at golden path that led to Toulon 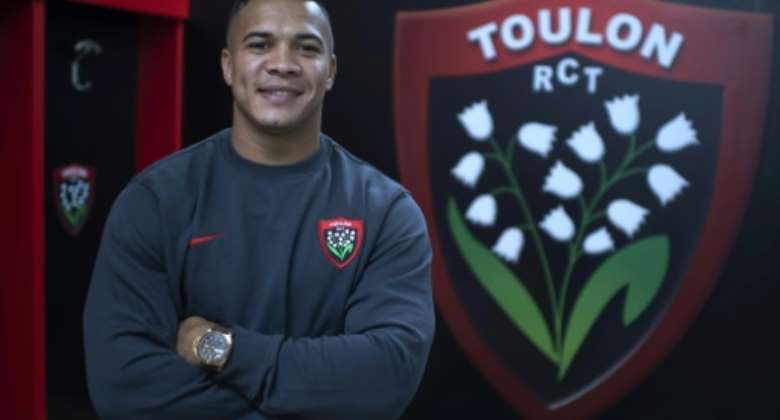 "I honestly never thought that I would come this far," said World Cup winning winger Cheslin Kolbe as he was unveiled by his new club Toulon on Friday.

The 27-year-old Springbok, who joined Toulon this summer after four years at Toulouse ended with a Top 14 and European double, talked at length to AFP about the obstacles he has overcome, his love of France and his excitement at his new challenge and at the potential of winning World Cup and Olympic medals in the country in the next three years.

"Looking back now, I honestly never thought that I would come this far in my rugby career because of all the challenges I faced at a young age," said Kolbe who is just over 5-foot-7 tall.

"Being told that I'm too small, I'm too light. I'll never be able to play against the bigger boys, especially in South Africa and obviously the guys from New Zealand."

"My dad always told me not to worry what other people said, just make sure to do what you set out for yourself."

"I was never big into rugby. I did athletics. Just getting to watch my dad each and every week and go to training with him. I just fell more in love with rugby and I just wanted to be like my dad as well."

At the double: Cheslin Kolbe scored for Toulouse as they beat La Rochelle in the Top 14 final a month after beating the same opponent in the European final. By Thomas COEX (AFP/File)

"He's done everything for me that he could do," Kolbe said. "We haven't had it easy. Growing up, we never had the best of things, but my parents always made sure that they could give me opportunities."

"It's been an unbelievable journey," he said. "I need to make sure that I keep working as hard as I can because there's so much talent out there that can just come in at any time."

"I think the specifics of rugby nowadays with the impacts and the intensity, you're lucky if you can play between 10 to 14 years of professional rugby, especially at the Top 14."

Kolbe was born and grew up in the northern suburbs of Cape Town and started his career with Western Province, winning the Currie Cup in 2014.

He joined Toulouse in 2017 and said his decision to join Toulon was partly motivated by a desire to remain in the Top 14.

"I wanted to stay in France because myself and my family, we just love the culture," he said. "We've made friends that became family to us across France."

He added that the family were contemplating staying "here as long as you can to hopefully qualify for our passports."

Kolbe played in the South African team that won the World Cup in 2019 and also collected a bronze medal as part of the sevens team in Rio in 2016.

The next rugby World Cup and Olympics will be in France.

"Yeah, 2023 is going to be massive, especially in France," Kolbe said. "For me, being here and playing here definitely helps."

"I'm not sure if my age is going to allow me to play in the next Olympics," said Kolbe, who turns 28 later in October. "Obviously, it will be a privilege for me whenever I get to represent my country and hopefully win that gold medal."

"For me, the most important thing is just to play as well as I can, and the rest will take care of itself.

"I'm just doing the best that I can to make my family proud, make the people that support me, make them proud and just have a positive influence."