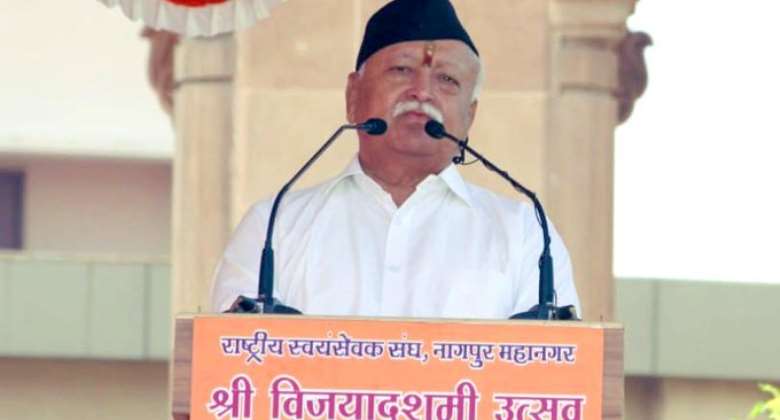 Guwahati: Advocating for a unified, strong and well-informed society with a national character, Rashtriya Swayamsevak Sangh (RSS) chief Dr Mohan Bhagwat commented that then only it can assert voices before the world communities. The RSS Sarsanghchalak also added that even to establish the truth and peace, strength often becomes necessary.

On the occasion of Vijayadashami Utsav (15 October 2021) during a public address from the RSS headquarter in Nagpur of Maharashtra, Sarsanghchalak Bhagwat stated that by becoming strong and fearless, Bharat (India) has to create a Hindu society that epitomises the words ‘neither do I threaten anyone, nor do I know any fear myself’.

The public address by the RSS Sarsanghchalak on the auspicious day of Vijayadashami, the day in 1925 the rightist organisation was formed, emerges as an annual practice, where its followers get the idea about a broad road map for the coming days. Bhagwat’s speech in Hindi, which was telecast live by many news channels of India and also made available in digital platforms for the benefit of millions of Sangh cadres.

Highlighting a range of relevant issues, the RSS chief emphasized to create an organised Hindu society so that the mainstream value system of Bharat would be able to withstand various threats with its social strength, confidence and fearless spirit. It is the responsibility of all those, who claim to be Hindus, to erect a stellar example of Hindu view-of-life with their conducts in personal, familial, social and professional domains.

Speaking about India’s 75th year of freedom from foreign rule, Bhagwat highlighted, “We took the reins of the chariot of our nation in our own hands to take it forward. That marked the starting point of our journey from Swadheenata (independence/self-rule) to Swatantrata (self-model of governance).” He however reminded the people that India did not gain freedom overnight.

With the essence of Bharat as the basis, bearing similar images of what the independent country would look like, several freedom fighters belonging to distinct castes and communities and from different regions of this landmass made noble sacrifices and penances for the cause, clarified Bhagwat adding that the society too, alongside these brave souls, bore the sting of slavery as one unified unit.

“Only then all paths - from non-violent movements to armed rebellions – could culminate into the ultimate destination of independence,” asserted Bhagwat adding that the entire society, especially the younger generation, should take cognisance of this history, understand and remember it. The Sarsanghchalak clarified that it’s not time to harbour feelings of animosity towards anyone.

He also paid tribute to Guru Teg Bahadur Ji Maharaj on the occasion of 400th Prakash Parva. Teg Bahadur, adored as ‘Hind Ki Chadar’, was targeted for his efforts to reinstate the cultural norms of the land (freedom of religion and practice of one’s beliefs without the fear of persecution) and finally martyred for standing up against religious bigotry that was much in prevalence in the then Bharat.

Bhagwat however cautioned that a systematic effort is underway to confuse the world and even the citizens of the country, through misrepresentation and propagandas against Bharat's history, Bharatiya culture and the socio-cultural groups which are working for the national rejuvenation of Bharat. The crooked minds are up to their same old tricks and search for newer avenues to further their misdeeds, he pointed out.

At the same time, Bhagwat expressed concerns over the arrival of different unregulated platforms like the OTT which are open to everyone’s indiscriminate consumption. In the backdrop of the Covid-19 pandemic, online education was to be introduced and today school-going children are also hooked on mobile phones as a rule. But in the absence of prudence and a regulatory framework, it is still difficult to predict in which way or to what extent, the emerging phenomenon of contacts will sweep the Indian society, said Bhagwat.

Mentioning about the probable third wave of novel coronavirus infection, the Sarsanghchalak commented that the Indian society through its collective efforts exemplified resilience. The second wave was far more destructive and it did not spare even many young people and he appreciated the efforts of the professionals who are selflessly dedicated in the service of humankind despite serious health hazards posed by the disease.

“The danger continues to loom on our horizon. Our battle with coronavirus is yet to be over, however we are more or less prepared to face the third wave as vaccines have been administered en-masse. The society at large is vigilant and Sangh Swayamsevaks along with several other righteous people and organisations have trained workers to support in case of any emergency,” stated Bhagwat.

He also observed that the pandemic reinforced the usefulness of Indian traditional knowledge systems. The people experienced the efficacy of our traditional lifestyle practices and Ayurvedic medicinal system in fighting and tackling the corona problem. In a geographically vast and densely populated country like India, the need to reimagine healthcare, which is not just from a preventive but also from a wellness point of view, becomes an important aspect.

A composed Sarsanghchalak by his nature, Bhagwat also highlighted the issue of rapid population growth in the country and commented that ‘this challenge must be duly considered’. He cited a resolution which was passed on the issue during the RSS’s Akhil Bharatiya Karyakari Mandal meeting at Ranchi in 2015, where it highlighted various challenges of imbalance in the population growth rate along with the steps to be taken to control the country’s population.

Raising the issue of abrupt growth rates of Muslim families in bordering localities of Assam and West Bengal, the RSS chief indicated towards the unabated infiltration from Bangladesh. He also cited the Upamanyu Hazarika Commission appointed by the Supreme Court and several judicial pronouncements from time to time which corroborated the facts. Pointing out that the infiltrators are usurping the rights of indigenous citizens and slowly becoming a heavy burden on local resources, Bhagwat added they are also creating socio-cultural, political and economic tensions.

Bhagwat supported the move to curb the illegal infiltration from across the borders and prepare a National Register of Citizens to prevent these infiltrators from acquiring citizenship rights and later purchasing lands. He also mentioned that in the present circumstance, news relating to persecution of native Hindus, growing criminalisation and pressure on them to escape their inhabited areas after an imbalanced population growth took place, also surfaced.

The uprising of Taliban in Afghanistan and its impacts on India were also included in his address, where Bhagwat stated that the predisposition like passionate fanaticism, tyranny & terrorism in the name of Islam is sufficient enough to make everyone apprehensive about the militia. Taliban has time and again alternated between Kashmir and peace talks with the government simultaneously.

“This is an indicator that we cannot retire in complacency. Our military preparedness on the borders needs to be alert and sound on all ends and at all times,” stated Bhagwat adding, in such a situation the internal security and stability of Bharat must be secured by the government and the society with caution and vigilance.