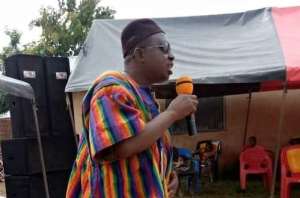 An independent parliamentary candidate for Offinso North constituency in the 2020 general elections Charles K. Boateng Sumaila affectionately called 'Fine boy' has asked all 33 Assembly members and government appointees who participated in the confirmation process to retain David Akwasi Asare Boakyeas as DCE for the Offinso North District to return alleged money allegedly collected during the process.

He said the alleged money received to influence the DCE confirmation must be channelled into fixing community challenges and not pocketing it.

"Fine boy" as widely called by residents of Offinso North made these observations in an interview on CruzFm morning show programme, expressing displeasure at the alleged uncouth behavior that characterised the DCE confirmation process.

"The DCE did not win in the first round of voting to be confirmed. He only won in the second round but what I heard was that some things happened, they were given money before confirming him," he stated.

He continued, "But what I entreat all assembly members to do is to ensure that money benefit their electorates by using part of it to fix some basic necessities in their localities.

"I give them one(1) week to summon their people, make it known to them how much they got from the DCE confirmation, identify and execute projects in their electoral areas", Mr. Sumaila urged, cautioning them to heed to his call or risk losing their designation in the coming assembly elections as he will embark on an exercise to insight electorates against them."

He lambasted the authorities of the Offinso North District Assembly for neglecting the district's ambulance service to begin to rot.

In a viral video sighted on social media, both Offinso North and South had their share of the 275 ambulances distributed by the government in June 2020 plus 30 ambulances broken down and parked at Tafo hospital in Kumasi.

"I give the assembly up to one month to fix the ambulance and make it available for operations in the district, after one month if the assembly does nothing to solve it, I will do it with my own money", he stated.