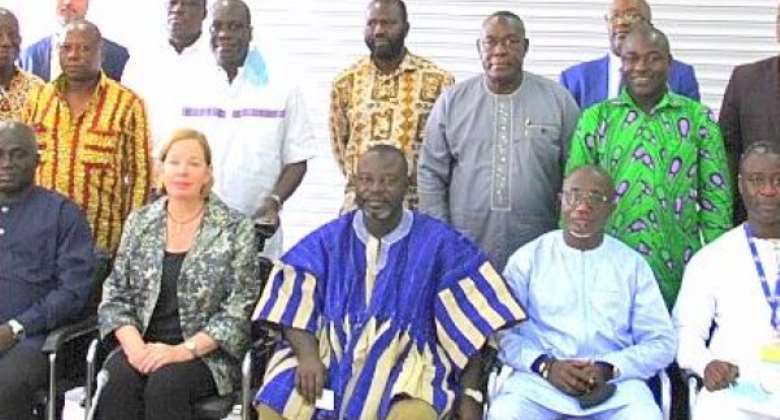 The National Fisheries Association of Ghana (NAFAG) has called for the establishment of a working committee to address ocean governance issues in the Ghanaian waters such as Illegal, Unreported and Unregulated (IUU) fishing and other fishing practices.

Mr Simon Agah, NAFAG President, made the call during a meeting between the representatives of NAFAG, United States of America Embassy in Ghana, and leadership of the Parliamentary Select Committee on Food, Agriculture and Cocoa Affairs, aimed at fashioning out collaboration between the stakeholders.

Mr Agah said the need for concerted effort to reverse current trends of ocean governance issues could not be over-emphasized, considering the importance of the ocean per facts and figures provided under Goal 14 of the Sustainable Development Goal (SDG) “Life Below Water”.

He said unsustainable ocean governance practices were not just about fishing, but the entire blue economy which span transport, oil and gas, tourism, among others.

He added that according to the Department of Economic and Social Affairs of the United Nations, before COVID-19, ocean acidification continued to threaten marine environments and ecosystem services, noting that a 100 to 150 per cent rise in ocean acidity was projected by 2100, affecting all of marine life.

As much as 40 percent of the ocean is heavily affected by pollution, depleted fisheries, loss of coastal habitats and other human activities.

“Information from SDG Goal 14 indicates that increasing levels of debris in the world's oceans are having a major environmental and economic impact,” he said.

He added that, “marine debris impact biodiversity through entanglement or ingestion of debris items by organisms, which can kill them or make it impossible for them to reproduce”.

The NAFAG President added that as far as the world's coral reefs were concerned, about 20 per cent of them had been effectively destroyed and show no prospects for recovery.

“About 24 per cent of the remaining reefs are under imminent risk of collapse through human pressures, and a further 26 per cent are under a longer-term threat of collapse,” he said.

Mr Agah indicated that improper marine management resulted in overfishing indicating that the lost economic benefits from the fisheries sector were estimated to be around US$50 billion annually.

The UN Environment Programme, he said estimated the cumulative economic impact of poor ocean management practices was at least US$200 billion per year, observing that in the absence of mitigation measures, climate change would increase the cost of damage to the ocean by an additional US$322 billion per year by 2050.

Touching on other issues, he noted that pollution of the ocean with plastic waste and dumping of fish that had been caught from any vessel, which was suitable for human consumption should therefore be reduced to its lowest level or completely eradicated.

NAFAG among other things recommended that there should be some capacity development for its associate fisheries associations and members of the Parliamentary Select Committee on Food, Agriculture and Cocoa Affairs in the short to medium term.

“NAFAG further requests that such activities should include study tours to the United State of America by industry players and members of the said Select Committee, to learn about best sustainable fishing management practices.”