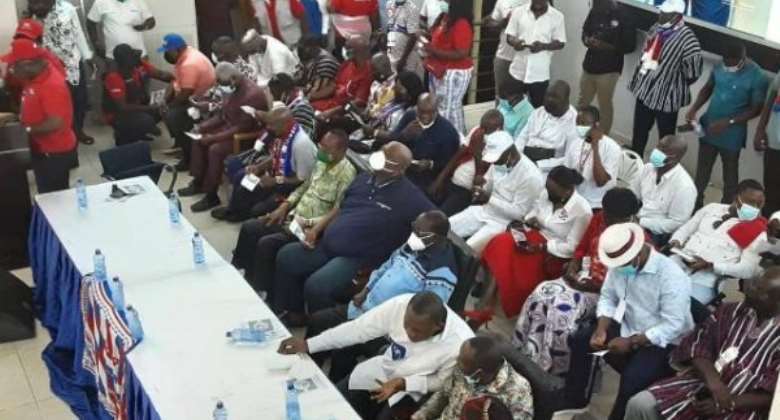 The Member of Parliament (MP) for the Weija-Gbawe constituency, Madam Tina Gifty Naa Ayele Mensah has appealed to members of the New Patriotic Party (NPP) to desist from the partial support they give to the party.

She said the "skirt and blouse" way of casting ballots in general elections that caused the NPP to lose seven from the 21 seats it held in the Greater Accra Region, had made it difficult to get things done in Parliament.

"Formerly, we were 21 but now we are 14 so we never get things done in Parliament and it is heartbreaking".

She made the appeal at the NPP's Greater Accra Regional Annual Delegates Conference in Accra, when she led some members of the NPP caucus in Parliament to the conference.

“It is not for fun fair that we are gathered here but a time for reflection. Breaking the '8' is not easy. We ask for peace and unity among us so that we can emerge victorious in the 2024 general election,” she said.

Mr Henry Quartey, the Greater Accra Regional Minister and MP for the Ayawaso Central constituency, placing emphasis on the concern of Madam Tina Mensah, said: “We are saying, break the 8-year chain of changing political parties and their administrations and yet, you are holding meetings among yourselves to bring someone down.”

He said one of his priorities since he was appointed as the Regional Minister, had been to reunite the party from the grassroots to the national level, as that was the only path to victory.

Mr Quartey cautioned them to watch the things they say among themselves and about their leaders everywhere including social media, as that could be used against them by their opponents.

Mr John Boadu, the General Secretary, NPP, said it was amazing and unfortunate that the NPP lost seven seats to the National Democratic Congress in the 2020 parliamentary election.

“It is amazing because, out of the seven seats, only Ledzorkuku went unopposed for good reasons, the rest were all elected in primaries, and yet party faithful did not vote for them.

“It is important that the members including delegates forgive one another, and not hold on to matters arising from conferences”.

He asked them to respect the decision of their own party saying, “Seats we have never lost before, because of misunderstandings, we lost them like Ledzorkuku, Okaikwei North among others”.