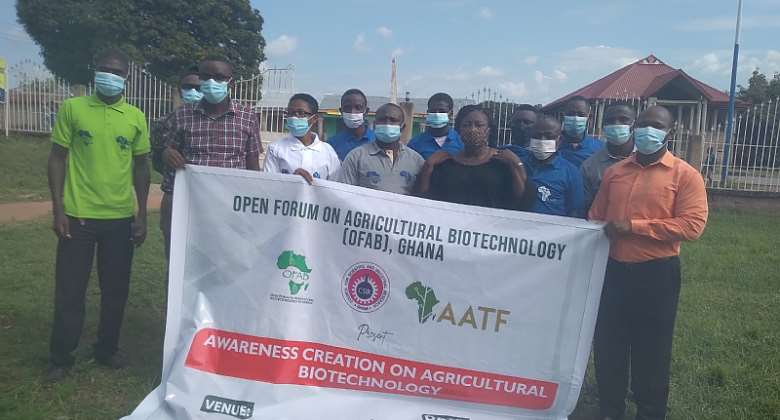 Scientists at the Council for Scientific and Industrial Research(CSIR) – Savannah Agriculture Research Institute (SARI) had trained small scale farmers in the Atebubu-Amanten municipality on a developed genetically modified cowpea variety that is resistant to the Maruca vitrata insect.

Maruca resistant cowpea was produced using genetic modification and engineering technique, the Maruca is a pod-boring insect of cowpea that causes up to 80 percent losses in heavily infested cowpea farms.

The Scientist trained over 170 small scale farmers at a day training organized by the Open Forum on Agricultural Biodiversity (OFAB) on the developed genetic modified cowpea variety that is resistant to the marica vitrata insect.

The training seeks to introduce and equip the farmers with knowledge on Biotechnology on Wednesday at Amanten in the Atebubu-Amanten municipality of the Bono East Region,

The team from the OFAB explained to the farmers that this technology, though not yet in the hands of farmers when introduced would greatly benefit the country when eventually rolled out.

Dr Daniel Osei Ofosu, Research Scientist at the Biotechnology and Nuclear Agriculture Research Institute of the Ghana Atomic Energy Commission in a presentation on the development of cowpea mentioned that the Maruca resistant cowpea was produced to help improve the high yield of the crop which remains the most valuable nutritious food in the country.

According to Dr Ofosu, genetic engineering is a tool in the toolbox of a plant breeder that enables the breeder cross the species barrier that limits conventional breeding and with this technology, a specific trait is moved into a crop of interest to solve an identified problem.

Dr Ofosu indicated that according to the plant law, this transfer is done in accordance with the Biosafety Act (Act 831) and with regard to human health and the environment.

DR Richard Ampadu-Ameyaw Senior Scientist at the Council for Scientific and Industrial Research(CSIR) and National Coordinator for OFAB-Ghana Chapter underscored the need for farmers to welcome the biotechnology technique that protects the cowpea and other related crops to grow well on the farms for good yields.

He added that the cowpea was an important cheap source of dietary protein with an energy content almost equivalent to that of cereal grains.

Dr Ampadu-Ameyaw hinted that nearly 200 million people in Africa consume the crop, despite its economic importance, cowpea yields on farmers fields were low.

He encourage farmers to embrace the genetic modification, biodiversity, and sovereignty of food crops.

Dr Ampadu-Ameyaw explained that the increase of human populations is anticipated to about nine billion by 2050 and the use of chemicals on crops in the fields had raised serious concerns about the need to protect humans, environment and all its biodiversity.

He said in response to this call, the convention on biological Diversity an international treaty, came out with three action points to help protect natural resources such as enhancement of conservation of biodiversity, sustainable use of the components of biodiversity and equitable sharing of benefits arising from the utilization of genetic resources.

According to Dr Ampadu-Ameyaw, the biotechnology covers a variety of techniques and applications that allow variations and enhancements in living organisms to provide desirable products for humanity.

He indicated that when managed properly, would help countries meet the Sustainable Development Goals (SDGs) 1,2,4,12 and 13 and arguably 15 faster than expected.

He urged the farmers to consider the cultivation of Genetic Modification Organisms (GMO) seeds as they were sure to increase crop yields, reduce cost for production, needs for pesticide, enhance nutrients composition and food qualities.

"The GMO seeds would again boost the resistance to pest and diseases, promote foods security and reduction of poverty and tolerance for minerals and other climate stressors," he added.

In an interaction with some farmers after the training, Mr Alidu Wonyala, Madam Deborah Watin Miaze, Cassava, Beans, Pepper and Groundnut farmers commended the organization for the training and that it has become an eye opener.

He expresses hope the biotechnology would become economic empowerment tool for them.

Mr Stephen Aidoo Atebubu-Amanten Municipal Director of Agriculture in a welcome address urged the farmers to take the training serious as it was the surest way to equip them in crop development in the area.

Mr Aidoo noted that the Department of Agriculture was committed to supporting farmers with modern agricultural services through well trained agricultural extension officers in the area, he urged them to form groups in order to command a collective voice.