Italian captain gets jail term for taking migrants to Libya 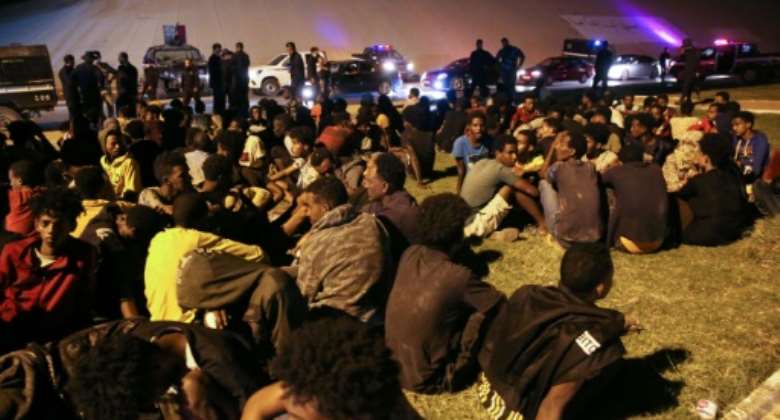 Migrants sit on the ground after being recaptured by Libyan security forces following an escape attempt. By Hussam AHMED (AFP/File)

A ship's captain who rescued a group of 101 migrants from the Mediterranean sea before handing them over to the Libyan coastguard was given a one-year jail term on Friday, in the first such case heard by Italy's courts.

Giuseppe Sotgiu was convicted of violating international laws that forbid the forced return of people to countries where they are at risk, according to a copy of the ruling dated October 13, seen by AFP on Friday.

Rights groups hailed the judgment, with Doctors Without Borders (MSF) calling it "an important first step" and urging a radical change in Italian and European policies to stop forced returns.

But some experts were surprised at the verdict, first reported in the Avvenire newspaper on Thursday, as Italy and the EU have financed and trained Libya's coastguard specifically to help halt the flow of migrants -- a deal severely criticised by activists.

Libya is not considered a port of safety under international law and earlier this week the UN Refugee Agency said it was "extremely worried" about continued suffering faced by migrants there.

Sotgiu picked up the migrants -- including five pregnant women and five minors -- near an oil and gas rig in international waters and handed them over to the Libyan coastguard at the port of Tripoli, according to prosecutors.

Naples chief prosecutor Giovanni Melillo told AFP in an email that the verdict "broadly" validated what his office had presented to the court even though the sentence was shorter than the 21 months they had demanded.

The captain can appeal against the conviction and even if it is upheld he is unlikely to go to prison, as short sentences often do not lead to jail time.

Sotgiu was piloting the ship Asso 28 owned by Augusta Offshore at the time of the rescue on July 30, 2018.

The migrants were picked up from an unseaworthy dinghy near a platform operated by Mellitah Oil & Gas, a consortium of Libya's National Oil Corporation and Italy's ENI.

Augusta Offshore, which works as a contractor for Mellitah, said at the time that the rescue had been coordinated by a Libyan coastguard officer and the Marine department of Sabratha, a city on the Libyan coast.

ENI said it had been coordinated by the Libyan coastguard.

Italian prosecutors said they could find no trace of a marine department in Sabratha nor evidence that maritime rescue coordination offices in Italy or Libya had been alerted.