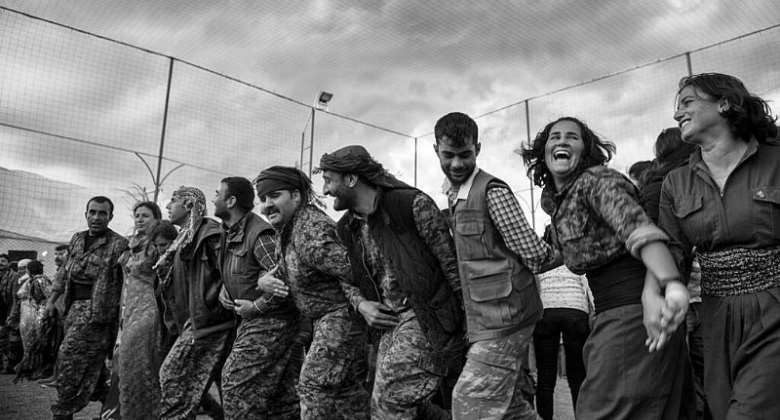 Maryam Ashrafi is an Iranian-British photojournalist who, since 2012, has spent months at a time covering conflict zones in Syria. Rather than focus on the fighting and desolation, she takes us beyond the archetypal scenes of war – where she finds people dancing and smiling, and children playing games in the rubble.

Ashrafi's new book Rising Among Ruins, Dancing Amid Bullets is a testament to the courage of those behind the frontlines for whom, despite the horrors of bloody combat, life carries on.

With her petite frame and her long, dark, flowing hair and quiet voice, Ashrafi defies the description usually associated with a “war reporter”.

She sees herself as an observer, a witness. She doesn't rush from one battle scene to the next, but instead spends time in one place, getting close to the people and their communities, and documenting how the war is shaping their daily lives.

Born in Iran in 1982 on the heels of the Islamic revolution – and during the Iran-Iraq war – Ashrafi grew up in Britain, where her left-leaning family chose exile. After studies in photography and sociology, she felt compelled to returned to the region.

Thanks to the help of her family's connections to the Kurdish resistance network, Ashrafi found ways to cross difficult borders and join groups of fighters, observing their rituals.

She began to document the evolution of the Kurdish militant movement in Iraqi Kurdistan and Turkey, and their subsequent battles with the Islamic State in Syria.

Her book spans this long period of her work. It is prefaced by Allan Kaval, journalist for Le Monde, whose reports on Syria won him the Albert-Londres Prize for French journalists, as well as two prizes at the Bayeux Awards in 2020.

When asked why she keeps returning to places so torn apart by violence and with so much suffering, Ashrafi says her photography enables her to humanise the conditions of war, offering her audience a chance to relate to those whose lives have become an unimaginable struggle.

Learning to cope
“Since I started this project, I always knew I had a responsibility to share the story of these people with the world,” she told RFI at the Bayeux Art and History Museum, where her works are on display until the end of October.

“People try to rebuild life by staying strong. You can see this when they dance, when they have funerals ... At the end of the day, it's something that they need to do to survive.”

Women and children feature prominently in Ashrafi's photographs. They are pensive, scared, serene, in mourning, in pain or radiant. Each face and every scene tells a story, which draws the curious viewer closer – eager to get a glimpse of lives the traditional media usually overlook.

“What we see on that side of the world is how women are victims of the war, how women have become slaves to ISIS," she says.

"That is a reality of course but at the same time women are a big part of society and rebuilding that society and they are fighting for change.”

Ashrafi points out a photograph of two small girls suffering from malnutrition in the Ain Issa IDP camp near Raqqa, Syria in 2017.

She cannot look at this picture without remembering the story that goes with it – the powerlessness she felt at not being able to do more for the mother of the children, who asked her to pass the photo on to the Doctors without Borders (MSF) staff working at the nearby hospital.

She says she found it hard to look the mother in the eyes when she went back to visit, knowing that the two girls had passed away. It was a moment she says she will never forget.

Children caught in conflict
“I think that journalists all face similar situations, and it doesn't mean that we fail, or we should stop – it just shows how difficult the journey is that we took. It's going to be full of these moments, sadly. But I just wanted to share that and pay my respects to the family and the other children.”

Ashrafi has often wondered if she was out of place or unwelcome during these moments of hardship, though the fighters, families and refugees always welcomed her and her camera, she says.

“They are aware of the power of the image,” and are keen to share their plight with the world.

"Life is not only what we see on the news and in magazines. Life goes on for them and they need help by building that bridge between themselves and the people outside.

"They're just like us. If you are against war and you want peace, then you need to understand the situation.”

Rising Among Ruins, Dancing Amid Bullets is the title of a book of black and white photographs by Maryam Ashrafi. It is also the name of the exhibition that is part of the Bayeux Calvados-Normandy Awards for War correspondents, at the Musée d'Art et d'Histoire Baron Gérard (MAHB) until 31 October, 2021.