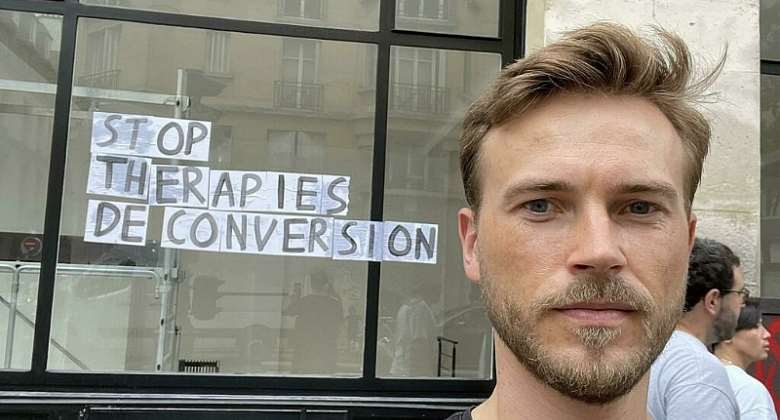 As a teenager, Frenchman Benoit Berthe was subjected to sessions led by a charismatic Catholic movement to "cure" him of his homosexuality. Traumatised, he went on to co-found Rien à guérir (Nothing to heal) – a collective that has helped bring a bill before parliament criminalising conversion therapies in France.

“Saving lives, is I believe, the challenge we face this evening,” said Gender Equality Minister Elisabeth Moreno ahead of last week's vote in the National Assembly.

Those lives, she went on, were being saved from "the claws of torture", the "hands of barbarity" and from "medieval practices" …because there was nothing to heal given there was no sickness to begin with.

"Being yourself is not a crime; we must not try to change someone's gender identity or sexual orientation,” Moreno said.

The bill is now in the hands of the Senate. Should it be passed, attempts to suppress a person's sexual orientation or gender identity will become a crime, punishable by up to three years in prison and a fine of €45,000.

"The law is not voted on yet so I won't claim victory too soon, but we have managed to do something that's never been done before in France's history," Berthe told RFI the day after the vote.

"All political parties, from right to left to centre, from extreme left to extreme right voted unanimously against conversion therapy. This is the first LGBT-related law in France that brings unanimity. We saw history in the making."

The United Nations has compared gay conversion therapy to torture. Some victims have committed suicide.

In 2018, the EU asked member states to ban it. Malta and some parts of Spain have done so, while other nations such as Germany, Belgium and the Netherlands are in the process.

Until recently, the practice was largely ignored here in France.

"Two years ago, no one in France was even talking about conversion therapy," Berthe says. "Then this year at Pride, so many people were supporting us with signs like 'There is nothing to cure'. LGBT+ people were as shocked as politicians to know it existed in France."

Listen to Benoit Berthe in the Spotlight on France podcast

Berthe, 32, has been helping lawmakers understand how damaging conversion therapy is by sharing his experience with them in the National Assembly.

He grew up in a loving family of devout Catholics, but for a long time could not tell his parents he was attracted to members of the same same sex. Berthe knew they saw homosexuality as "a perversion”, but by the age of 15 he could no longer hide it.

"My mother first asked me if I was touched by a priest, and if I had same-sex sexual activities. I answered 'no'. Those questions showed how much my parents felt that homosexuality was a kind of disease, something bad you catch from outside."

Berthe's parents wanted to help, and that meant "curing" him.

"They thought that if I embraced the homosexual lifestyle, as they called it, I would be deeply unhappy."

For the next three years Berthe's parents forced him to attend camps run by the Catholic Les Béatitudes community to heal his "deep wounds”.

The camps were held at weekends and during the summer in remote places such as castles and monasteries.

"You feel very disconnected, you're living the life of a monk or nun. You don't eat much, you sleep in cells and you are not allowed to speak to other people," he recounts.

The hardest parts were the one-to-one psycho-spiritual sessions with spiritual guides, or fathers.

"You're basically putting yourself naked spiritually,” says Berthe. “The theory is that you are deeply heterosexual, and homosexuality is just something dirty that you have to clean."

As time went by and Berthe showed little inclination to deny his same-sex attraction, the sessions became more punitive.

“They said homosexuality was against nature, that homosexuals have to sew up their arses at the end – disgusting images that you wouldn't ever think about as a child.

“They present homosexuality in an awful way, to basically teach you to become homophobes against yourself."

Berthe describes an abusive process that exploits vulnerable people who're struggling to comes to terms with their homosexuality.

When he turned 18, he left home to study and found the strength to end the camps. But by then he was broken.

"I was totally scared, frozen, unable to meet people in real life because my idea of homosexuality was so broken and dirty that I felt I would be raped by people like that."

He finally managed to break his isolation by talking to other gay men online. “They had happy stories, sad stories … I understood that what I'd been told was massive bullshit.”

Meeting his first love was a turning point, helping him realise homosexuality was not against nature after all.

"Everything felt natural to me and I became myself for the first time. I felt happy, like a sheet being pulled away. It was a revelation."

Gauging the extent of conversion therapy in France is difficult. As it's not yet a crime, there are no statistics – and the practices are necessarily clandestine.

But the MPs who proposed the new law, Laurence Vanceunebrock from the ruling LRM party, and Bastien Lachaud from hard-left France Unbowed, cited around 100 recent cases in their preliminary report.

They including the use of hypnosis, hormones, spiritual retreats, electric shocks, exorcism and forced marriage. What's more they claim the practices are on the rise in France.

This is most obvious in religious settings, notably charismatic Catholic groups such as Courage or evangelical protestant movements such as Torrents de Vie – the French branch of Streams of Life in the US.

Jean-Loup Adénor and Timothée de Rauglaudre, co-authors of the book Dieu est Amour (God is Love), carried out a long investigation into Courage and Torrents de Vie, which also features in a TV documentary.

“It's clearly expanding,” Adénor told RFI. “Before 1990 there were no 'ex-gay' groups in France, no specific group created to 'heal homosexuality'. But in 1995, Torrents de Vie was set up and now there are around 15 branches in France.”

Then in 2014/2015, Courage took off, boosted by the Manif Pour Tous – protests that opposed the law on same-sex marriage, Adénor explained.

Conversion therapies also take place in non-religious settings. Pseudo-doctors and some psychotherapists have been found to use hormone therapy, and even shock therapy.

There are also social settings where homophobic families may apply pressure for LGBT+ people to undergo forced heterosexual marriage or even "corrective rape".

Last summer a psychotherapist in Paris was filmed proposing intra-uterine therapy, which in the US has led to death from suffocation.

“Some practices are profiting from legal loopholes and we didn't manage to prosecute this person,” says Berthe. “In fact she prosecuted us for defamation.”

He says this shows the need for a law to define conversion therapy, so victims may be given the tools to understand that they were abused and sometimes tortured, and that they have the right to sue.

French law already provides for the prosecution of some aspects of conversion therapy under crimes such as "wilful violence", "abuse of weakness" or the "illegal exercise of medicine".

In May, Moreno said there was no need to criminalise conversion therapies because such practices “were strictly forbidden in France”.

She changed tack before the vote, however, recognising the need to make it easier for victims to press charges.

“When you've been a victim of conversion therapy, it takes years to understand that you've been through something abnormal,” Berthe says.

Some legal experts have questioned how effective such a law would be given that many institutions will simply hide their activities. But Berthe maintains it's not just about punishment.

Much of the time perpetrators don't even realise what they're doing is illegal, he says. “The law is also a way of preventing abuse.”

When Berthe was about 23, his parents realised the harm they had caused their son and apologised publicly on TV.

“They're horrified, and very ashamed,” he says, adding their apology has helped his ongoing healing process.

“I understood with research that what they did was through love, but it was clumsy love. It was done through kindness because they didn't know what homosexuality was.”

Berthe also believes paedophilia within the Catholic Church has made his devout parents question their tactics.

“They saw the church being broken and they started to question an institution they had never questioned before,” he says.

These days Berthe's Mum and Dad are able to see their son for the happy, adult gay man that he is.

“The testimony of my happiness was the best argument that I could have given them.”