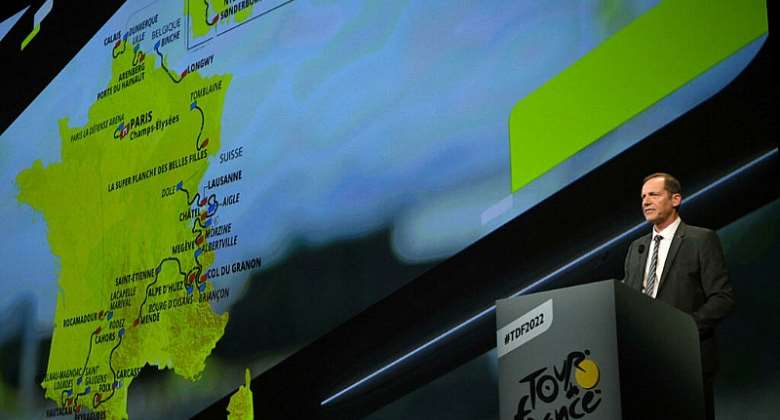 Defending champion Tadej Pogačar was joined by fellow star riders Mark Cavendish and Julian Alaphilippe in Paris on Thursday at the unveiling of the route for the 2022 Tour de France.

The 109th edition of the race will start on 1 July in Denmark.

After three days in Scandanavia, it will take in passages in Switzerland and Belgium, rise through the mountains of France before culminating with a dash around the Champs Elysées in Paris on 24 July - the same day that the inaugural women's race starts.

During the 2021 event, Cavendish won four stages to draw level with Eddy Merckx' record of 34 victories.

Alaphilippe claimed the first stage of the 2021 race before dropping down the order to finish 30th.

Fresh from his triumph in the men's road race at the cycling world championships in Belgium, Alaphilippe said: "Next year's Tour has a first week that promises to be exciting. There are time-trials as well as cobbles."

The 29-year-old Frenchman added: "It's going to be a first week with a lot of movement. It's a difficult course, that's for sure. There are really tough things ahead of us."

Victory
Pogacar was a surprise winner in 2020. In 2021, he won the 17th and 18th stages in the mountains to effectively anoint himself the champion.

A few days later, after the ceremonial procession between Chatou and Paris, Pogacar, for the second year in a row, mounted the podium on the Champs Elysées to soak up the plaudits and accolades for a second successive triple: the white jersey as the best young rider, the polka dot vest as the "king of the mountains" and the most coveted of them all - the yellow jersey.

The Slovenian became the first cyclist to win successive Tours since Chris Froome in 2015 and 2016 and join a list of 20 men who have won multiple Tours since its inception in 1903.

"It's an interesting course from the first to the last stage," said Pogacar on Thursday.

"Sprints, wind, cobbles, short, long and steep climbs. It will be a really complete Tour and there will be a lot of contenders."

Pogacar added: "I've just finished the season and I need a rest before I start thinking about 2022. There's a bit more pressure when you've already won, that's for sure."

After the men's race finishes, an eight stage women's race will begin from Paris.

That route heads east towards the Vosges mountains and the Haut-Rhin before snaking through the vineyards in Champagne. A final weekend of high-altitude ascents follows with a finish on 31 July at Super Planche des Belles Filles in north-eastern France.

“With only eight stages, we couldn't go down to the Alps or the Pyrenees, the transfers would be too long,” she said of the 1,029 kilometre course.

“The stages obviously are shorter for the women than for the men's races," she added. "The men can go 225 kilometres. For the women the longest race on our roster is 175km and we even needed special dispensation for that,” she said. “But it's a course I love.”