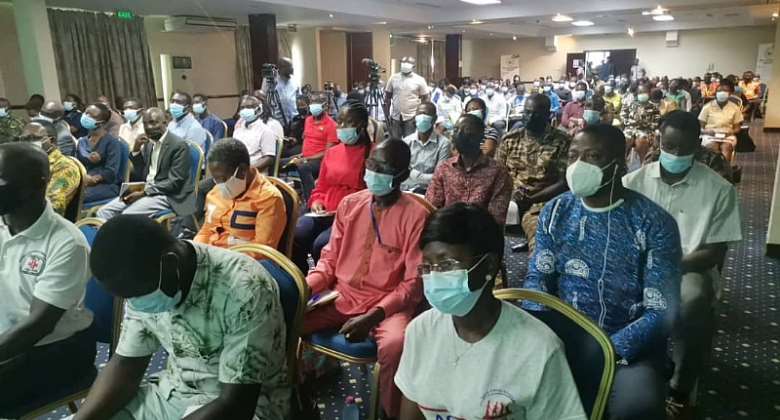 The Chairman of the Right to Information Commission (RTIC) Justice Ofori Atta has urged media practitioners to collaborate with other stakeholders to ensure that the RTI Law is fully operationalized in the country.

According to Mr. Justice Ofori Atta, the media can be successful only when they come together with a united voice in the RTI fight. He pointed out that there are numerous challenges journalists and information seekers are going through in accessing information despite the fact that the RTI law has been passed.

Speaking to this reporter on Thursday, October 14, 2021, during a day capacity building workshop organized by RITC for stakeholders Kumasi in the Ashanti Region on the implementation of the Right to Information (RTI) Act, the RTIC Chairman said government was committed to ensuring that the Act was implemented for the common good of the citizenry.

"This program aimed at affording us the opportunity to interact with the public on what is expected of them in them in the implementation of the Act 989 which is a necessary tool in government effort to attaining good governance and sustainable development," he stated.

Justice Ofori Atta explained that the meeting was also to enable them share ideas towards the full operationalization of the Act explaining that the RTI law seeks to give effect to Article 21 (1) (f) of the 1992 constitution which states that "All persons shall have the right to information subject to such qualifications and laws as are necessary for a democratic society."

He warned state institutions that are charging huge fees before releasing information out to the public to desist from very worrying practices.

For his part, the chairman of the National Media Commission Yaw Boadu Ayeboafo said the workshop was part of measures to ensure that stakeholders particularly the media aligned with the processes required for the law before its full implementation.

The workshop held at the Golden Tulip Hotel in the Kumasi Metropolis according to the commission was part of activities outlined to educate the public on the enforcement of the Act. The meeting was attended by heads of public institutions, relevant private institutions, students, civil society groups, the media fraternity and other stakeholders in the Region.

The right to information is a fundamental human right guaranteed by the country’s 1992 Constitution and recognised as a right under International Conventions on Human rights.

The bill as it has been drafted is to give substance to Article 21 (1) (f) of the Constitution which states that “All persons shall have the right to information subject to such qualifications and laws as are necessary for a democratic society.

Immediately withdraw your directive to Goil; it's dangerous ...
12 minutes ago