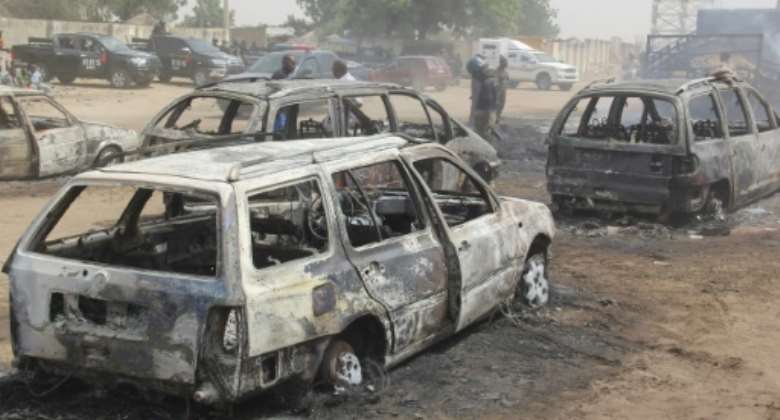 Deadly: At least 30 people were killed and women and children were abducted, in an ISWAP attack on the village of Auno in northeast Nigeria in February last year. By AUDU MARTE (AFP)

ISWAP has not given any confirmation of al-Barnawi's death and Nigeria's army has claimed before to have killed jihadist commanders only for them to reappear.

"I can authoritatively confirm to you that al-Barnawi is dead. As simple as that. He is dead and remains dead," Chief of Defence Staff General Lucky Irabor told reporters.

He did not give details on how or when al-Barnawi had died.

Under al-Barnawi, ISWAP became the dominant jihadist force in Nigeria's conflict, striking frequently at troops in an insurgency that has killed more than 40,000 since it begun in 2009.

Al-Barnawi's loss would be blow to ISWAP's structure just as it was consolidating since the death of rival Boko Haram commander Abubakar Shekau earlier this year during infighting between the factions.

But since splitting with Boko Haram in 2016, the group has shown its resilience and carried out large-scale ambushes on the military just in the last several weeks.

"Should al-Barnawi be dead, his death may not have too much impact on ISWAP because of how structured the group is," said Malik Samuel, a researcher with the Institute for Security Studies.

"Since the 2016 split, ISWAP has had about five leadership changes but the group has maintained its consistency in launching deadly and successful attacks against security forces."

Al-Barnawi is the son of the founder of the Boko Haram militant group, Mohammed Yusuf, who was killed in police custody in 2009 in Maiduguri.

But the ISWAP commander rose to prominence after breaking away from Boko Haram over differences with its commander Shekau, who according to security sources killed himself in May rather than face capture by his rivals.

Since Shekau's death, security sources say, al-Barnawi had consolidated ISWAP's control in Nigeria's northeast and the Lake Chad region but pockets of Boko Haram loyalists have been fighting back.

Borno State in northeastern Nigeria has borne the brunt of the jihadist campaign launched by Boko Haram a dozen years ago. By Jonathan WALTER (AFP)

Last month, ISWAP fighters killed 18 Nigeria security personal in an ambush in northeast Borno state using roadside bombs and rockets in one of the deadliest assaults this year.

A week later another eight soldiers were killed when ISWAP militants opened fire with rockets on another convoy also in Borno.

But Boko Haram jihadists also launched an attack last month on ISWAP militants on the Nigerian side of Lake Chad, ISWAP's bastion, seizing a strategic island, according to fishermen and a security source.

Since Shekau's death in his Sambisa forest enclave, ISWAP has been fighting Boko Haram remnants who have refused to pay allegiance.

Hundreds of Boko Haram members have also since surrendered to the army along with families and children.

More than two million people have been displaced by Nigeria's conflict since it began 2009, and the violence has spread over the borders to Niger, Chad and Cameroon.