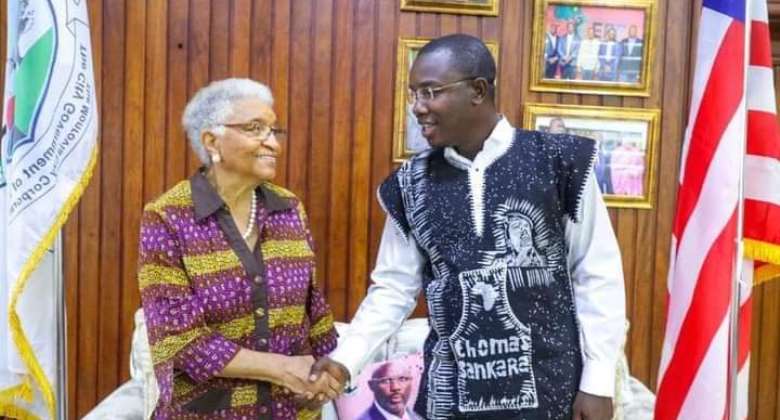 On the sidelines of her courtesy visit to the Monrovia City Corporation (MCC), Liberian President Ellen Johnson-Sirleaf snubbed comments by European Union Delegation to Liberia Head, Laurent Delahousse against sanitation challenge in Monrovia.

"I am not here for that [unsubstantiated comment]. I have just returned from Freetown. The efforts to clean Monrovia must begin in our various homes. Every Liberian must get involved. I came to share with the Mayor of Monrovia, Jefferson Koijee, the Freetown experience," she told newsmen at the Monrovia City Hall on the afternoon of October 13, 2021.

According to the former Liberian leader, achieving the goal of a clean, green and safe Monrovia is no magic wand. "It needs to start from the homes. I will help in whatever way to solicit support for the Monrovia City Corporation and the country as a whole as a citizen who mean well," she added.

Madam Sirleaf indicated, "Each person can do something in his or her community to make the City better. Cleanliness should start with us the citizens. No matter the amount of efforts the MCC puts in, if we continue to handle waste the way we are doing, the situation will not improve."

For his part, the Mayor of Monrovia Jefferson Koijee said the visit was intended by the former Liberian President to pledge her support to the workings of the Monrovia City Corporation regarding the vision to keep Monrovia clean, safe and green under the Smart Action for Smart City Strategy

Although the Freetown scenario does not entirely correlate with Monrovia's considering the eligibility status of the Mayor of Freetown, the MCC would seek to pick some of the applicable strategies that have worked in the neighbouring city.

Mayor Koijee said the knowledge module is one reason why he is pushing for the establishment of the Mano River Union Mayor's Association that would facilitate the sharing of valuable information and technical ideas to keep cities within MRU clean, green and safe from time to time.

He stressed that the contribution of former President Sirleaf like any other citizen is pivotal to achieving the overarching goals of the Pro-poor Agenda for Prosperity and Development (PAPD).

Mayor Koijee reminded citizens of Monrovia that the citizen-driven approach as re-echoed by the former Liberian leader is our focus because unless Liberians take charge of their environmental sustainability in a clean, green and safe environment in Monrovia and other parts of the country would remain an illusion.

According to him, the City Government is adopting a bottom to top approach that would allow community leaders to work with households to put in place a regimented waste disposal mechanism that is sustainable primarily because the people would take ownership while the city Government provides leadership.

Another way the City Government of Monrovia is looking to remedy the menace is through converting them to value added products such as briquettes for domestic as well industrial fuel.

This is why, Mayor Koijee added, the forum was organized to bring all stakeholders to the table to discuss ways as well as communicate to them sustainable approach the city government is putting in place to address the abounding challenges.