Thoughts Of A Nima Boy: A Conversation With A Bookstore Keeper And ‘Ace Of Spades’ Book Review 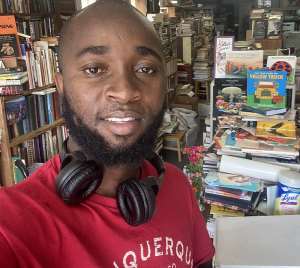 On one of the recent Fridays that passed, I stepped out when the sun decorated the skies with all of its splendor and beauty and took a trip down the Cornell Drive to send some items through the United States Post Office in Albuquerque to the third-largest city in Ohio, Cincinnati.

As I manoeuvred my way through the numerous hoodlums in the hood and looking in wonderment at the well-designed layout and aesthetically structured buildings, I stumbled upon a treasure trove of a bookstore that got me enthralled by the scenery and atmospheric vitamins therein. My fascination with books immobilizes me anytime I see them, especially in large quantities. I was carrying loads of clothes so I hurriedly went to do my transaction at the post office and walked back straight to the bookstore. I decided to stop by and make some selections that will give me the best value for the few dollars I will have to spend. So, I lingered for a while as I rummaged through the thousands of books to make my careful selections. The bookstore is manned by an old woman who gave her name as Laura. From every indication, Laura is a diligent woman who is young at heart judging from the energy with which she was organizing her books and the dexterity with which she arranged them. I struck a conversation with her and I realized behind that elderly-looking woman is an activist who is very passionate about her community and books. She stated that the shop is more than fifty years in existence and pulled me to the side to see the beautiful design made to commemorate the almost six decades of providing a platform that seeks to change attitudes and internal feelings of the community. Sure, that is what books do. They provide education.

Books in that bookstore have always been sold for far less its price. Also, they have a great collection of used books that goes for a dollar or less, sometimes even for free. The old woman also got fascinated about my passion for books because I kept telling her the value of each book I saw in there. I told her when the book was released, its author and attempt to summarize it for her. And that aroused in her a great interest which led her to ask how come I have all this information about books. I recounted to her about the great number of years I spent in shaping my community through literary activism. I told her about Success Book Club, the most active book club in Ghana which was formed with the vision of eradicating illiteracy completely from our midst and also to give the youth a platform, to uplift and develop themselves through reading. I showed her our social media handles and that really got her enthralled.

She was also concerned about the paucity of reading among the youth now. She told me not many students come around the bookshop which is so surprising to her. In her time, she stated that reading was taken up religiously by the youth. I got very interested in the conversation because in Ghana, we face a similar situation if not worse. Ghana is sick of a disease called National Reading Deficiency Syndrome as declared by Dr. Doris Yaa Dartey, the former Board member of the Graphic Communications Group Limited. Anytime the discussion of reading among the youth come up, my mind goes straight to the interaction I had with the former Secretary-General of the Pan-African Writers Association, the late Prof. Atukwei Okai. I will always remember that impactful moment so long as the cords of memory would allow. I was invited to speak to a group of school children on the importance of reading in their lives and decided to use Kwame Nkrumah as a focal point because the day coincided with the celebration of the formation of Organization of African Unity, now African Union. I used him because apart from being a politician par excellence, his personal life is a testament to how far one can go through reading. He lived for reading and read. After my speech, the revered professor gave me a standing ovation and stressed on the fact that we have to inculcate strongly in the young ones, a profound reading spirit. This he believes will give the children a future. He stated that “and what we need to understand in this country is that the future of a child is the future of the country. A strong advocacy for reading great value to education would lift the nation's comprehensive quality to flourish and grow.

After a great conversation with Laura, I left the bookshop with about five books which included Bill Clinton’s My Life, Dan Brown’s Angel and Demons, John Grisham’s The Testament, Ronald W. Clark’s Einstein, The Life and Times and Ace of Spades by the British Avid Tea-Drinker, Farida Àbíké-íyímídé’s; and this is the book I am reviewing this week. And as usual our writer, Pre-law, Youtuber, model and Human Rights Advocate who lives in Manhattan, Kaya Hamza will do the review for us.

In Farida Àbíké-íyímídé’s debut novel “Ace of Spades”, two black students go face to face with an unforeseen enemy at their elite, predominantly white school. The story begins with Chiamaka Adebayo, and Devon Richards being named school prefects, a position they both believe will further their chances of getting into their dream colleges. In high spirits, Chiamaka goes to meet up with her best friend Jaime Fitzjohn. Chiamaka has been in love with Jaime for a very long time and hopes that he will finally confess to the feelings she believes he has for her. So far, her day could not get better. However, she is in for the shock of her life when she realizes that Jaime has not called her to confess his feelings for her but to confess his feelings for another girl! Heartbroken, she goes home only to find that details of her encounter (as well as her supposed feelings for Jaime) have been sent out to the whole school. Devon, on the other hand starts the day off badly as intimate pictures of him and an ex are leaked. He endures snickers and curious glances from the student body throughout the day. What our main characters think to be a one-time event gets worse.

What starts out as a cruel prank turns into something more sinister as the story progresses. Private details such as addresses, and more compromising photos are being sent out via mass text. These events have unfortunate consequences on the two as Chiamaka who manages the science cupboards has her privileges revoked and both her and Devon are later suspended as prefects. As the cruelty continues, Chiamaka and Devon soon realize that they are the only two in the school being targeted.

Àbíké-íyímídé’s book discusses elements of institutionalized racism while putting two people of color from very different backgrounds at the forefront. For example, Chiamaka and Devon do not realize that what they are facing is racism until Devon tells Terrell, his mysterious friend outside school about the strange happenings to which Terrell asks if Chiamaka is also black. This opens a new perspective to how children of color who have grown up in predominantly white communities perceive race.

Another topic the book discusses is affirmative action which I believe is very important today when many more people of color are going into professional fields and graduate school. When Devon confronts his best friend Jack after discovering Jack is a part of Ace, Jack justifies his actions by stating that due to affirmative action, Devon will have more opportunities than he ever will after high school whereas he (Jack) will have to work twice as hard.

Ace of Spades has supporting characters that one has to address as well. Although Chiamaka and Devon’s friends are all part of “Ace”, one character to take note of is Jaime. Although he is a huge part of the society antagonizing Chiamaka, one cannot deny his feelings for her. However, as this conflicts with his racist views, he comes across as someone who is confused at times. This is shown at the climax of the book when Chiamaka taunts him saying that despite his faults, he enjoyed every bit of what went down between them. This angers him and he attempts to choke her, but Chiamaka manages to get away. Terrell is another character that deserves a mention. Despite his betrayal, he amends his faults by coming clean to Devon and helping our main duo out.

I find that most of the topics that Ace of Spades delves into are not something that the average Ghanaian individual born and raised in Ghana finds relatable. However, for Ghanaians born outside the country or born in Ghana but raised outside, it is an entirely different story. As conversations regarding racism abroad have increased in the past year among the Ghanaian online community living in Ghana and outside (especially after the death of George Floyd in May 2020), I believe this book helps one gain some insight into what it is like to be a minority with a system stacked up against them.

This book has the most trigger warnings I have ever seen (as it should) but it is so beautifully written that sometimes the reader feels at one with the main characters or is a part of the story watching it all unfold. It is almost like being a Fate and watching what you have woven come true. I believe it is worth the read. Àbíké-Íyímídé’s has created an unforgettable masterpiece.

NB: The writer is a youth-activist and a student of knowledge.