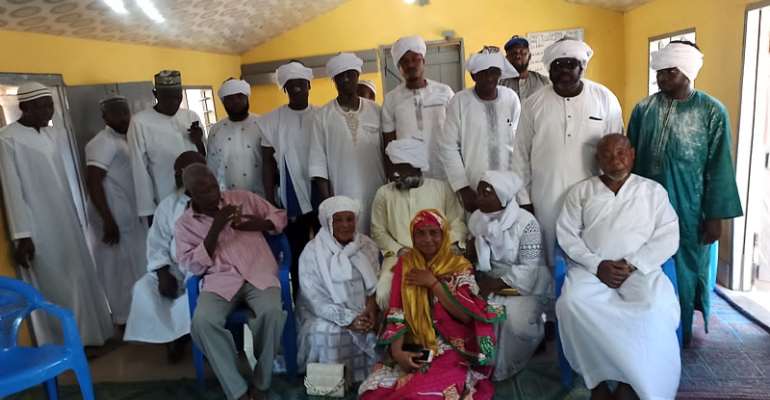 Sarki Imran Hashiru Dikeni is the host of an Islamic program, As-Sauwah on Accra base ATV. He is also a co-host of the morning show on Marhaba FM also in Accra.

The coronation of the new Zongo Chief had in attendance prominent Zongo Chiefs across the region, political party functionaries traditional leaders as well as well-wishers.

The colourful occasion which took place at the Mooley Mosque in Russia Nmemnete was the first of its kind within the community.

In his remarks, the newly installed Chief, Alhaji Imran Hashiru Dikeni indicated that his first area of concern is to unite his people for development as well as promote peace amongst the Muslims and other tribes.

He revealed that his Palace will ensure that education becomes his topmost priority indicating that education has become very important in nation-building.

He said he and his cabinet members have outlined major challenges confronting the community and will engage the appropriate stakeholders to address the situation.

Sarki Imran Hashiru Dikeni urged the youth to desist from any form of criminal activities and rather focus on things that will bring development to the area.

He also advised them to stay away from drugs.

On their part, the Muslim leadership and kingmakers of Russia Nmemnete called on the newly installed Chief and his cabinet members to work hard to bring development to the area.

They further advised Chief Hashiru Dikeni and his cabinet to respect each other's views and opinions and work for the interest of their people and not for their selfish gains.