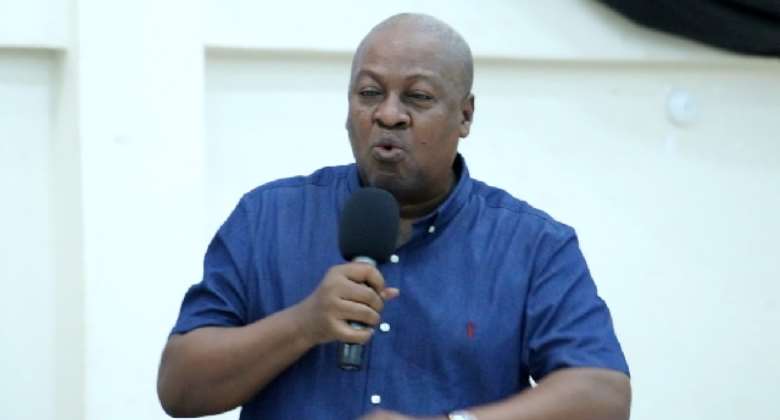 Former President John Dramani Mahama has labelled President Nana Akufo-Addo of focusing more attention on cutting sod for his Agenda 111 hospital projects than paying attention to the several hospital uncompleted projects and others that his government inherited from the previous administration.

Speaking during a courtesy call on the Eastern Regional House of Chiefs in Koforidua on Tuesday, 12 October 2021, as part of his Thank You tour of that part of the country, Mr Mahama complained to the traditional leaders about the current government’s abandonment of several uncompleted projects started under his administration.

“Nananom, there’s a very worrying development that I cannot avoid talking about and that is the issue of abandoned projects”, Mr Mahama noted, pointing out: “Governments are enjoined to continue the projects began by their predecessors”.

“Unfortunately, it will appear that after 2016, the new government that came, has either advertently or inadvertently refused to work on many projects that the previous governments started and I can name so many of them: there are road projects, hospital projects, school projects”, he said.

For instance, Mr Mahama observed: “I know in my brother Kwawumanhene’s jurisdiction, the famous Abetifi Hospital is crying for continuation and completion”.

“If you go to other places, there are many of such hospitals that have been abandoned”, he complained.

However, he said: “I’m happy to note that the Somanya Hospital has been completed but then it needs to be operationalised as quickly as possible”.

The government, he mentioned, “says it is going to build 111 more hospitals”.

“If some have been finished, at least, let them start working while you bring in the extra 111 or if some were ongoing, complete them and add the 111 hospitals”, Mr Mahama insisted.

“Unfortunately, it looks like there’s more attention in cutting sod for the new 111 hospitals than there is for completing the hospitals that are already under construction and, so, these are things that I think we need to draw attention to”, he said.

Apart from the health infrastructure, Mr Mahama said “there are many road projects that we started; the government asked the contractors to stop work and they wanted to audit the projects before they continue [but] up till today, those projects have remained abandoned”.

He, however, said: “I’m happy that the sod I cut in Somanya for the university that we popularly call the Eastern University, in fact, which is the University of Environment and Sustainable Development, that project continued and the main campus of the university is almost complete”.

“Unfortunately, we sought Koran funding for the satellite campus – we call it – which was supposed to focus on agriculture to be put in Afram Plains, Donkorkrom, in the Kwawu traditional area. Unfortunately, by the wisdom of the government, it decided that it will shift the campus from Donkorkrom to Bonsu in the Akyem traditional area. That would not be a bad thing if it is operationalised. Unfortunately, it doesn’t look like that project has started in any earnest but these are some of the things that are happening”.

In the education sector, Mr Mahama said: “We had several E-blocks that were ongoing. Unfortunately, several of them have been abandoned, even though some have been completed, children have not been put in”.

“Others are at a very advanced stage of completion; there’s one in Sekesua; anytime I drive up the road to Asesewa, I pass by it and I see it. There’s one at Obopa, it’s also abandoned and then there’s one at Apesua, [which] has been completed but it is not being used; it’s empty, children have not been put in it and it’s a shame to see that you have a whole completed secondary school that can take more than 1,000 kids and yet you are forcing children to go – either as red traffic light or yellow or green – according to the different tracks”.

“If we completed even a fraction of the schools that are near completion, we would ease the congestion in our existing secondary schools and we’ll be able to abolish the double track system”.