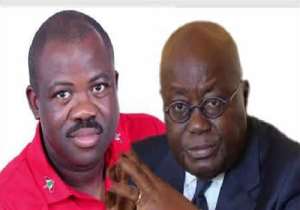 He argues former President Mahama’s thank you tour is what informed the president to also start a tour to inspect work undertaken by the various ministries under his watch.

“I expected President Akufo-Addo to salute former President Mahama for showing him the way and going on tour. The president took the cue from ex-president Mahama when he started his thank you tour. We had already started touring the country and are now going to the Eastern region because there are a few places we’re yet to go on his (Mahama’s) thank you tour,” he shared.

Joshua Akamba in an interview with Happy98.9FM’s Don Kwabena Prah on the Epa Hoa Daben political talk show said, “President Akufo-Addo is on a working tour because we started our tour.

The former President started a tour of the sixteen administrative regions of Ghana on Tuesday, August 17, 20221 to thank Ghanaians for their support and votes in the December 2020 elections.

As part of the visits, President Mahama is meeting with Chiefs and Queen mothers, and holding meetings with religious and opinion leaders, addressing regional and constituency executives and supporters of the NDC and also interacting with the media.

The first phase of his tour took him to the five regions in northern Ghana in August.

The second phase of the tour took him to the Bono East, Bono, Ahafo, Western North and Ashanti Regions of the country.

From Tuesday, October 12, 2021, former President Mahama will take his thank you tour to the Eastern Region.