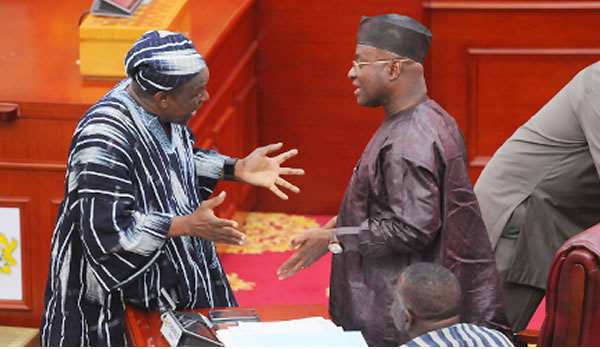 The Majority Leader in Parliament, Osei Kyei-Mensah-Bonsu has asked the Speaker of Parliament, Alban Bagbin that he cannot make predetermination for the House in relation to the anti-LGBTQI bill which is currently before the House.

The Suame Member of Parliament explained at a press conference in Accra on Tuesday, October 12 that the Speaker is not a lawmaker hence, does not have the powers to make any determination in this matter.

At best, he said, he can make a referral to Parliament which will be programmed by the business committee for consideration.

The Speaker had said that he is pro-life therefore parliament will pass the bill as soon as possible.

Mr Kyei-Mensah-Bonsu told journalists that “If I heard right, the Speaker was even saying that the bill is going to be passed but I have a little bit of challenge with that. Technically the speaker is not even a Member of Parliament, the speaker cannot commit Parliament.

“The Speaker can make a referral to Parliament which will be programmed by the business committee for consideration. I will find it difficult if we have a speaker who will in spite of his own antecedent as former Member of Parliament to say that Parliament is going to pass the bill. It is a bit of a difficulty.

“I am not saying that parliament is not going to pass the bill but the speaker should not make a predetermination for the house because he is not a member of parliament and this is the business of parliament.”

He further stated that in principle, no lawmaker is against the antigay bill which is currently before parliament.

“In principle, I am not sure any Member of Parliament will be against the principle of this bill. I am an African, I am a Ghanaian, an Ashanti, Kwabre man and I have my own values.

“I have my own upbringing, one that is shaped by my tradition and upbringing. As I have said along the line, I am Christian, I was born into Assemblies of God church so my faith also impacts on my upbringing. But that is not the only thing that shapes my upbringing,

“That is why I am saying, and I refer to the first provision in Chapter 11 of the Constitution which is Article 125 when it says that justice emanates from the people.

“We have our concept of what is right and what is wrong, I don't know of any ethnic group of this country that will applaud this.”

For instance, a private legal practitioner Mr Akoto Ampaw has said the way and manner the bill has been designed indicates the extremism of the mind frame that produced it.

He is totally against the bill and wants it abandoned.

He further said the current debate on homosexuals in Ghana is not about religious beliefs or numbers.

Several bodies including the Ghana Catholic Bishop Conference have said that want homosexuality to be illegal in Ghana.

In relation to this matter, one of the sponsors of the bill, Ningo Prampram lawmaker, Sam George had earlier described Professor of Journalism and Mass Communication, Kwame Karikari as a hypocrite following his submission on the bill.

He said if he is asked to score Professor Karikari on his submission, he would give him an F.

Prof Karikari had said the bill which Sam George and some of his colleague legislators are promoting is dangerous because it seeks to promote hate for homosexuals in the country.

In the view of Prof Karikari, gays and lesbians are human beings and deserve to be respected and protected as any other person.

To that end, he said, any law that seeks to create problems for this group should be rejected.

He said this while speaking on the First Take with Dzifa Bampoh on 3FM on Monday October 4.

He said he and a few of his colleagues who are fighting for the rights of homosexuals to be respected in Ghana are going to hold a public forum to debate this subject.

“Hopefully, the media may also want to pick up the debate, debate them so that the public will instantly get to know the views that we hold and the views that the proponents of what we considered to be a dangerous bill also hold.

“This law is setting up the minority up. Our constitution does not discriminate about humans beings unless the proponents of this bill, unless the 95 per cent who say they don't like homosexuality, we want them to say that homosexuals, lesbians are not human beings. Are they human beings also are they not human beings?

Speaking on the same programme, Sam George said “He has made so many sweeping comments and I expected that he would have been held to strict proof. His argument is hollow and if I was marking this as a script he will score an F.

“This is someone who says the constitution protects people, you [Dzifa Bampoh] read to him a section of the bill which provides protection for persons who identify as LGBTQ from extra judicial treatment and he tells you it is a hoax.

“This is the same person asking us to provide proof of the health challenges, the public risk that the LGBTQ community proposes and he is telling you that our bill is a hoax without any proof.

“Today 4th October, the head of the Ghana AIDS Commission, speaking to another media house in Accra decried the increasing prevalence of HIV/AIDS in Ghana and the fact that HIV prevalence in Ghana is rising. In that interview, he was asked specifically which demographic is pushing this number up, he said men having sex with men. That is the empirical evidence. Now can you ask Prof Kwame Karikari and his cohorts what empirical evidence they have to say that say part of our bill is a hoax? Has he educated himself and has he read the bill or he is basically just running riot in town on the basis of their misconception?”

He said although Mr Akufo-Addo has stated categorically that gayism and lesbianism will not be legalized under his watch, the President must begin to take measures to stop the gayism movement that has started in the country before he exits office.

“ The church of Pentecost is 10.38 per cent of the Ghanaian population and we are against this LGBTQI+.

“Our concern is not about today, it is about the future. Today when we let in this LGBTI what is going to happen is that we are going to accept same sex marriage which the president says it is never going to happen at his watch.

“This movement is an insult to God the creature, you are just telling God that he didn't think enough,” he told journalists on Wednesday October 6.

The Church of Pentecost on Wednesday presented a memo to parliament in support of the steps taken to pass the anti-gay bill which is currently before the legislature.

The memo was presented to the lawmakers on Wednesday October 6.

The clergy men were received by Sam George.