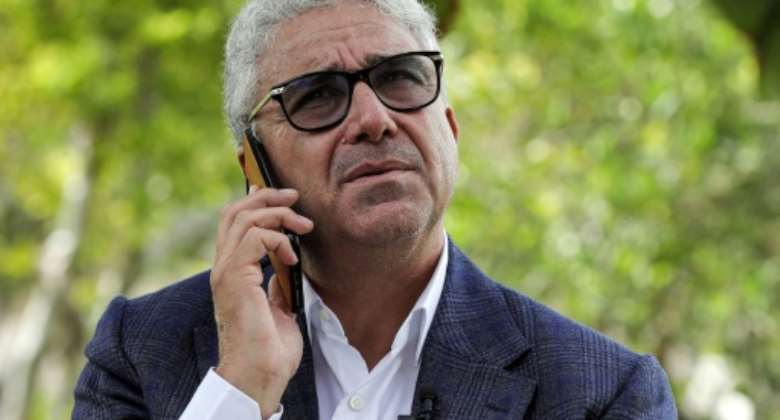 Fathi Bashagha, Libya's former interior minister and first candidate to officially throw his hat into the ring for Libya's presidential election, has committed to making security and economic reform his top priorities if elected. By Mahmud TURKIA (AFP)

Former interior minister Fathi Bashagha, the only Libyan so far to publicly announce a run for president in polls due on December 24, has put "security and economic reform" at the heart of his pitch.

The polls will end a year that started badly for the 59-year-old.

In February, he was narrowly beaten in elections to the post of interim prime minister as part of UN-led peace efforts.

That same month, he survived what aides called a "well-planned" assassination attempt -- a hail of bullets fired at his convoy on a highway near Tripoli.

But Bashagha, a heavyweight in Libyan politics and champion of efforts to integrate the North African country's many militias into the state, is not backing down.

He wants to get Libya back on its feet by reviving the crisis-hit economy, he told AFP in an interview in his garden in the Tripoli suburbs.

"Security goes hand in hand with economic reform," he said.

"There needs to be an urgent plan for economic reform and to strengthen the dinar against the dollar, and the private sector needs to be encouraged."

The December polls are part of United Nations-led efforts to turn the page on a decade of violence in the North African country, just over a year after a landmark ceasefire between eastern and western camps.

A unity government took office in March with a mandate to lead Libya to presidential and parliamentary polls, a process overshadowed by disputes over the legal basis for the votes following years of division and collapse of the state.

That system collapsed as the country fell into conflict after Kadhafi was toppled and killed in 2011, leaving many Libyans in poverty and without access to basic services.

Bashagha says bringing the country together must involve local authorities.

"Local government must be strengthened through a decentralised system, via municipalities and provincial authorities," he said.

Some analysts have warned of a return to conflict should the polls be cancelled -- or be held but produce contested results.

But "the elections must go ahead," Bashagha warned.

Otherwise "there would certainly be a political conflict and extreme polarisation, which I fear could turn into an armed conflict."

The run-up to the elections has been overshadowed by disputes over their legal basis.

Bashagha said "some politicians don't want to see elections held as that would threaten their personal interests".

Some Libyans "also fear the election of someone inappropriate, either from the previous regime or a military figure," he said.

Libya's eastern-based parliament in September passed a bill on presidential polls that critics say bypassed due process and was tailor-made to allow a bid by General Haftar -- who then temporarily stood down from the military, allowing him to run.

Seif al-Islam, son of Moamer Kadhafi, gave a rare interview to The New York Times in July in which he suggested he too may run.

The polls follow years of UN efforts to find a way out of the violence that has plagued Libya since Kadhafi's fall.

Bashagha was involved in UN-led talks in Morocco in 2015 that led to the creation of a previous unity government.

But it was his term as interior minister from 2018 to 2021 that brought him onto the national stage, with his campaign to reduce the influence of Libya's vast array of militias and integrate them into the state.

"It needs one single army, something that shouldn't be hard under a unified government."

Bashagha, from the port city of Misrata, is one of the few Libyan politicians to have good relations with all major foreign players in the country's conflict.

He told AFP that Libya would also need help from the UN and the European Union on irregular migration.

It has become a major conduit for migrants boarding unseaworthy boats to seek better lives in Europe. Those stuck in Libya often face horrific abuse at the hands of militias.

"Libya has a big problem regarding its southern borders which are out of the state's control," Bashagha said.

"The borders should be brought under control using advanced technology -- but we should invest in some categories of migrants, because Libya needs qualified workers."