Defiant Taiwan leader says island will not bow to China 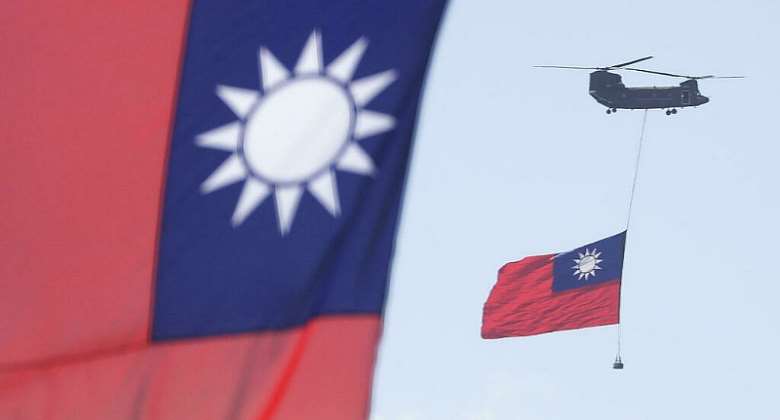 Taiwan will not bow to pressure by Beijing and will defend its democratic way of life, President Tsai Ing-wen said Sunday during Taiwan's national day of celebrations.

Foreign dignitaries, including  a number of French, were in Taiwan in a week that saw the highest incursions by Chinese warplanes into Taiwan's self-proclaimed its air defence zone.

Self-governed Taiwan's 23 million people live under the constant threat of invasion by authoritarian China, which views the island as its territory and has vowed to one day seize it, by force if necessary.

"The more we achieve, the greater the pressure we face from China," Tsai said in a speech marking Taiwan's National Day, adding: "Nobody can force Taiwan to take the path China has laid out for us."

She described Taiwan as "standing on democracy's first line of defence".

"We hope for an easing of... relations (with Beijing) and will not act rashly, but there should be absolutely no illusions that the Taiwanese people will bow to pressure," she added.

The Global Times, an english-language mouthpiece of China's Communist Party, called Tsai's speech a "political farce, staged by [Taiwan's president] Tsai that serves to promote their desinization agenda and daydream of a 'two-state theory-'" Beijing-speak for Taiwan's independence.

The two sides have been ruled separately since the end of the Chinese Civil War in 1949.

Tensions have risen to their highest in decades under Chinese President Xi Jinping, who broke off official communication with Taipei following Tsai's election five years ago and increased economic, diplomatic and military pressure.

The latest flare-up has seen a surge in the number flights by Chinese fighter jets and nuclear-capable bombers into Taiwan's air defence identification zone (ADIZ).

149 sorties were made into the zone in the days surrounding China's own National Day on 1st of October -- a record number.

Three Chinese planes, including two fighter jets, crossed into the zone on Sunday, according to Taiwan's defence ministry.

French delegation
Some foreigner dignitaries were in Taiwan during the 10/10 celebrations. Australian former Prime Minister Tony Abbott, who visited the island in a "private capacity," described China as a "bully" and stressed the importance of "solidarity with Taiwan," while speaking at a regional conference on the island.

On Friday, Richard met with the Taiwan that National Human Rights Commission. According to the China Times, Richard commended Taiwan for striving to incorporate conventions such as the Convention on the Rights of Persons with Disabilities (CRPD) and the Convention on the Elimination of All Forms of Discrimination against Women ( CEDAW) into domestic legalization,” even though Beijing is preventing Taiwan from joining the various UN bodies that are in charge of these conventions.

Last March, Richard had sponsered a resolution in support of Taiwan's international participation in international organizations such as the WHO's World Health Assembly, Interpol, the World Aviation body ICAO and the UN Panel for Climate Change, which the French Senate passed unanimously.

Beijing continuous to block Taiwan from entering any of the UN bodies, maintaining that the island is “an inseparable part” of mainland China, which already adheres to all the UN bodies.

China has on several occasions criticized Richard, but he added fuel to Beijing's anger when he called Taiwan a 'country' during a meeting with President Tsai Ing-wen last Thursday.

E-levy has been approved, we just need backing legislation –...
37 minutes ago