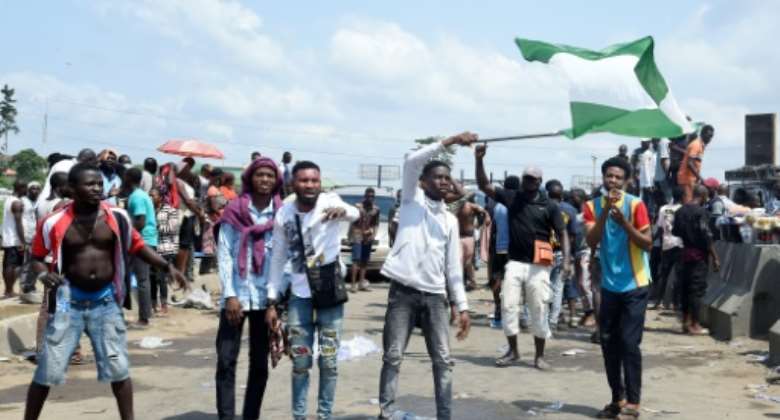 The protests were the largest in Nigeria's modern history. By PIUS UTOMI EKPEI (AFP)

Nigerian police in Lagos on Monday warned against any protests planned to mark the anniversary of the mass #EndSARS rallies that rocked Africa's most populous country a year ago.

The #EndSARS movement began in October 2020 initially over abuses by the notorious SARS anti-robbery squad but grew into the largest anti-government protests in Nigeria's modern history.

Lagos Police Commissioner Hakeem Odumosu gave the warning about protests on Monday after receiving intelligence about "clandestine plans by some youths, individuals or groups to embark on a protest today".

"To forestall breakdown of law and order, the police will use all legitimate means within their constitutional powers to suppress the planned protest," he said in a statement.

During last year's rallies in Lagos, thousands took to the streets bringing the country's economic capital of more than 20 million people to a standstill.

The rallies ended soon after at least 10 people were shot and killed at Lekki tollgate in Lagos, prompting international outcry and an investigation into the deaths.

Real bullets were only shot in the air, the army said.

The government disbanded the SARS police unit in a concession to protesters.

But key figures of the campaign say they have since been pressured by the authorities and subjected to intimidation and harassment, according to Amnesty.

Judicial panels were set up across Nigeria to investigate police abuses, including what happened on October 20 in Lagos.

But proceedings at the panel in Lagos have often stalled, with representatives of the army failing to show up.

Since the initial mass rallies in October 2020, several much smaller protests have been held in Lagos and Abuja.

Omoyele Sowore, an activist who took part in the movement, said on social media that memorial protests would be held on October 20.

"Nobody can suppress the will of Nigerians," he said.

Some Nigerians have turned to using VPNs to get around the ban while officials say the social media platform will be restored soon after negotiations with Twitter.

Park your car if you don't want to be vaccinated — Dr John N...
41 minutes ago