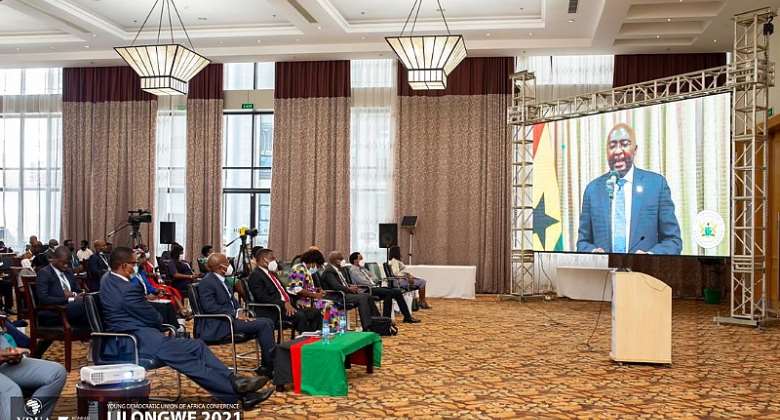 The Vice President of the Republic of Ghana, Dr Mahamudu Bawumia has called for increase access to quality education for young people by African governments.

In delivering his virtual keynote address at the annual conference of the Young Democrat Union of Africa (YDUA ) which is currently are underway in Lilongwe the capital city of Malawi urged African governments to look towards improving educational reforms for a prosperous society.

“The theme of this conference resonates well with some of the aspirations of the 'Agenda 2063: The Africa We Want,' the UN Sustainable Development Goals and also with the agenda many African Leaders have set for themselves including my own President H. E. Dr. Nana Addo Dankwa Akufo-Addo and the Malawian President H. E. Dr. Lazarus Chakwera. The engagement of young people is critical to the development of African countries. Africa's biggest resource is our young people and their zealousness to create and make change. Every policy directive and initiative by governments, state and non-state actors should be done in a way that prioritizes the interests of young people as well as the future,” he stated.

This year’s conference has drawn participants and speakers from all over Africa and Europe, most of who belong to political parties with centre-right ideology.

The opening ceremony of the conference was held at the Umodzi International Convention Center , Lilongwe on 5th October 2021.

Dr Bawumia who couldn’t travel to Lilongwe but joined the event virtually praised the effort of the YDUA President, Louisa Atta-Agyemang for the effort to put together the conference and working to promote democracy on the continent.

He reiterated the commitment of President Akufo-Addo’s government to invest massively in making education accessible to all Ghanaians and further called on other African leaders on the continent to follow suit, citing Ghana’s Free SHS/TVET as a model worth emulation.

Dr Bawumia further entreated African governments to put the youth at the centre of their policies.

He further stated how impressed he was with the work of the union even within its short period of establishment.

In attendance were Hon. Eisenhower Mkaka , the Foreign Affairs Minister of Malawi and Secretary-General of the Malawi Congress Party, The Chief Advisor to the Malawian President on Public Policy and Governance, Dr. Samson Lembani, The Chairman of the Democrat Union of Africa and Leader of Namibia’s opposition , Hon McHenry Venaani, Former NPP campaign manager and current board chairman of COCOBOD Ghana , Peter Mac Manu, Mr Sammi Awuku, National Organizer of NPP and Director General of the National Lotteries Authority, Dr Holger Dix , Director of the Regional Programme Political Dialogue for Sub-Sahara Africa Konrad Adenauer Foundation , Hon Olivia Liwewe , Electoral Commissioner of Malawi, Prof Mario Voigt of the CDU Germany, as well as many other dignitaries and delegates.