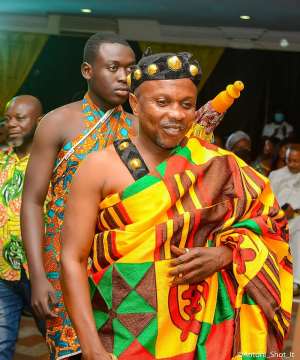 3G Media Group proudly announces that Highlife legend; Kaakyire Kwame Appiah has been nominated to be honored at its Special 10th Edition of 3G Awards in the United States. He was recently enstooled as; as the Benkumhene of Bosomtwe Asaman with the stool name NANA ADIEAMUODURO TRIMUDE KAAKYIRE KWAME APPIAH I.

Philadelphia-based Rosette Multi Service LLC is the parent company of 3G Media Group and its Chief Executive Officer, an American is; Evangelist Charles Nimmo Ntiamoah-Mensah aka Mr. CNN. US based Media Mogul. The event is also on the heels of the media personality cum Evangelist celebrating multi-anniversaries code named; 21-13-12-10-1; 21 years in Media/Showbiz, 13 years of publishing the 3G Magazine 12 years of organizing the 3G Awards, 10 years of operating the Rosette's Multi-Service and Food Supermarket, 1-year - topping it first anniversary of hosting “The CUMIEES Show” on 3GTV which is shown live on Facebook.com. CUMIEES Stands for; Captivating, Uplifting, Motivating, Empowering & Exalting our Savior Through Worship.

Kaakyire Kwame Appiah, is a household name amongst music lovers particularly highlife music. His real identity is attached to one of his hit songs; “24th”, a song many consider the best Ghanaian Highlife of all time as the song depicts the Ghanaian hustler who is forced to return to folks in the village, because of the adverse effect of economic hardship in the city. There are many lessons you can draw from the lyrics and it shows his deep sense of understanding about the Ghanaian lifestyle and societal challenges. This goes to confirm the narrative by industry players and music lovers that the indigenous highlife composed in the past remains the best, as 24th continues to remain relevant despite the advent of competition and the dynamics in the music industry. He has played and continues to play a key role in the music industry nurturing many talents and producing legends of our time. Under the able guidance of his God-father Prince Osei Kofi of the African Heroes Band fame, he mastered the composition of music and the ethics of the music career spanning a half decade of diligence training from 1987-1992 with the African Heroes Band, which would guide me to compose many hits songs in my formative years and at the peak of mine career.

In 1992, he released his first album "Fakyeme" after going solo before going on to release other hit songs. He has to his credit the following albums; 24th, Soloku special, Yenko di Bronya, Samantha, "Ice Cream Baby, "Mpenaba", Atrapo, Kwaadonto, etc. He craved excellence in every action taken in his career. He has also been able to produce 38 musicians and produced about 78 albums through his junior brother; Kwame Micky who was his Music Producer and he was the Executive producer. As a business minded person and a multi-talented he ventured into the movie industry featuring and producing local movies through his production company; 2KA where I became an Actor, movie Director, executive producer and produced about 16 movies and just to mention few; Owuo Safoa, Osofo mafia, Susu brebi, Who killed Uncle Atta, Enkoyie etc. which continue to produce good local movies for our entertainment.

In 2020, he was appointed as a Patron of their ebullient group; The Lovers of Highlife Ghana alongside three other distinguish personalities, his sterling leadership, wise counsel and the passion to see the group meet its objectives of igniting the Love for Highlife music continue to inspire leadership and members of the group. Moreover, he was appointed by the government of Ghana under His Excellence; Nana Addo Danquah Akuffo-Addo as the one of the Tourist Ambassadors in the creative Arts in 2017. Ghanaians are not surprised that he had become the obvious choice of his kingmakers to occupy the Benkumhene stool and his subsequent enstoolment and coronation.

The enstoolment certainly marks another chapter of his life as the expectation of his kingmakers, traditional leaders and the people of Bosomtwe Asaman would be high. But as a visionary leader, he has always been, he knows the good Lord will see him through during his reign to bring development and meet the expectations of his people. On the occasion of his estoolment as the Benkumhene of Bosomtwe Asaman with the stool name NANA ADIEAMUODURO TRIMUDE KAAKYIRE KWAME APPIAH I, the executives and members of LOHGHA congratulated him for this royal honour and wished me the best of everything.