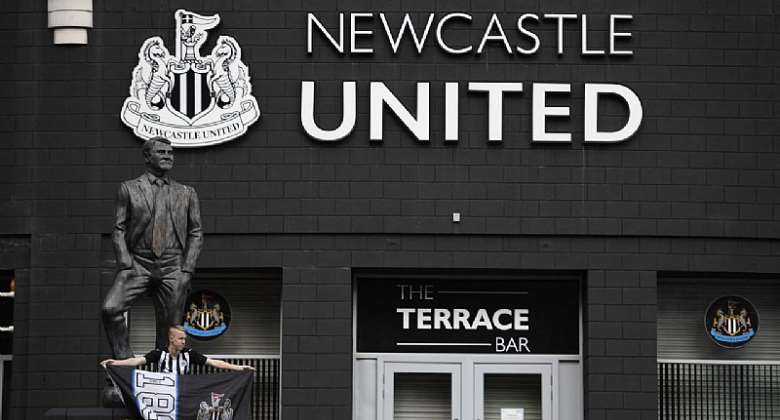 A Saudi-led consortium completed its takeover of Premier League club Newcastle United on October 7 despite warnings from Amnesty International that the deal represented "sportswashing" of the Gulf kingdom's human rights record. (Photo by Oli SCARFF / AFP)

The recent acquisition of the Newcastle United football club by Saudi Arabia’s Public Investment Fund, along with financier Amanda Staveley and the billionaire Reuben brothers, was a source of much excitement for some former players. Old boy Alan Shearer did little to conceal it. “We can dare to hope again,” he rejoiced.

In The Guardian, Barney Ronay was less enthusiastic, notably at the appearance of the House of Saud in English football. “Welcome, Mohammed bin Salman, to the billionaire boys club. No need to wipe your feet. Although maybe, on reflection, do wash your hands. Those damned spots, eh?”

Hatice Cengiz, fiancée of the Saudi dissident journalist Jamal Khashoggi so brutally carved up in his country’s Istanbul consulate in October 2018, spoke of her heartbreak. It was “a real shame for Newcastle and for English football” that the club was now in the hands of “the person responsible for the murder of Jamal.”

The CEO of Amnesty International UK, Sacha Desmukh, described the deal as “an extremely bitter blow for human rights”. Great football clubs, she claimed, were “being used to sportswash human rights abuse.” Saudi Arabia had undertaken this move as part of an “aggressive move into sport as a vehicle for image-management and PR plain for all to see.”

The deal had been reached in April last year but stalled after Qatar-based beIN Sports voiced opposition. The broadcaster, holding broadcasting rights to the EPL for audiences in the Middle East and North Africa, was banned by Saudi Arabia in 2017 as part of the Kingdom’s effort to blockade Qatar.

Relations between the states have since thawed. “Following completion of the Premier League’s Owners’ and Directors’ Test, the club has been sold to the consortium with immediate effect,” the EPL confirmed in its October 7 statement. The body had also been given “legally binding assurances that the Kingdom of Saudi Arabia will not control Newcastle United Football Club.” This is much wishful thinking, given that the PIF is personally chaired by the crown prince and governed by a board stacked by Saudi government ministers and royal favourites. And just to make matters that much darker, the fund was behind the purchase of a company which owned the two private jets used by the death squad responsible for Khashoggi’s killing.

The fanbase had other priorities: the celebrated departure of the detested Sports Direct billionaire Mike Ashley; the closing of a dark chapter lasting 14 years; a shell of a club that could be revived. Under Ashley, the club went into decay, suffering two relegations and the estrangement of its supporters.

They gathered in number, cheering the announcement, sporting Saudi flags and, rather disconcertingly, donning masks of bin Salman. One fan, Paul Loraine, claimed that there was “not a lot we can do about the human rights stuff”. He reflected upon the clothing “borne out of sweatshops in countries with human rights issues. The moral compass is always a strange one in times like this.” Strange, and relativised to such a point that Ben Machell of The Times could suggest an off-colour joke regarding the unpopular manager, Steve Bruce. “Hope Newcastle United’s new owners don’t have Steve Bruce strangled and dismembered”.

While topflight football has a habit of drawing out bleeding heart sentimentalism, the Saudi role provided suitable distraction from a competition that long ago ceased being concerned with human rights or the moral compass. The acquisition was merely another move that has become common in the English Premier League, a form of soft power at play, a place to park dirty money and forum for blood-soaked finances.

Even Shearer had to admit that the sport had faced a number of sketchily drawn lines in the sand, making any claims to moral fibre weak. “Maybe it was Russian involvement in the Premier League, China or Abu Dhabi. Maybe it was Americans using the club’s own money to help complete their purchase of it.” Qatar was set to host the World Cup while Saudi Arabia had invested “in all kinds of businesses in this country and a variety of sports worldwide. It was only a matter of time before it turned to football.”

Fans of a club such as Manchester City, having tasted the sort of success in recent years Newcastle United has only dreamed of, would also have to face these lines. In June 2007, Thailand’s former prime minister Thaksin Shinawatra purchased it for £81.6 million. Affectionately known to fans as Frank, he promised much, delivering a coach in the form of Sven-Göran Eriksson and a number of top shelf players. But during his time in office, the human rights record of the country was severely blotted. Between January 2001 and January 2005, eighteen human rights defenders were assassinated; one was disappeared. In February 2002, the Thaksin government commenced its own version of the “War on Drugs”, which saw over 2,700 extrajudicial killings.

With Sheikh Mansour of the United Arab Emirates taking the reins at Manchester City through the Abu Dhabi United Group just over a year later, a corrupt, sanguinary owner had been replaced by a member of an absolute ruling family. “City fans knew that the UAE had a dodgy human rights record. But many of us preferred to turn a blind eye,” recalls Manchester City follower and writer Simon Hattenstone.

In 2020, Amnesty International noted the continuing UAE practice of banning political opposition and imprisoning those seeking a change of government. To this could be added the conduct of trials marked by forced confessions and the incommunicado detention of accused parties. In terms of labour conditions, the UAE’s kafala sponsorship program for migrant workers remains famed for its brutal conditions and lack of protections. The Gulf state has also been a co-leading member of the coalition with Saudi Arabia in the brutal conflict in Yemen and supplier of arms and drones to the rebel Libyan National Army.

In a singular mark of cognitive dissonance, the Sheik’s ownership of the club could somehow sit alongside the wearing of a yellow ribbon by club manager Pep Guardiola, worn in solidarity for political prisoners jailed for campaigning for Catalan independence.

In turning over a new leaf, Newcastle United has placed its faith in a theocracy that does away with its dissidents using bone-sawing death squads. A support base long starved of success is already looking the other way, while the city will be looking for Saudi money to fuel investment. The ghosts of Khashoggi and other victims will be, at least for a time, passed over as needless distractions.

Court withdraws arrest warrant for Xavier-Sosu after reporti...
58 minutes ago