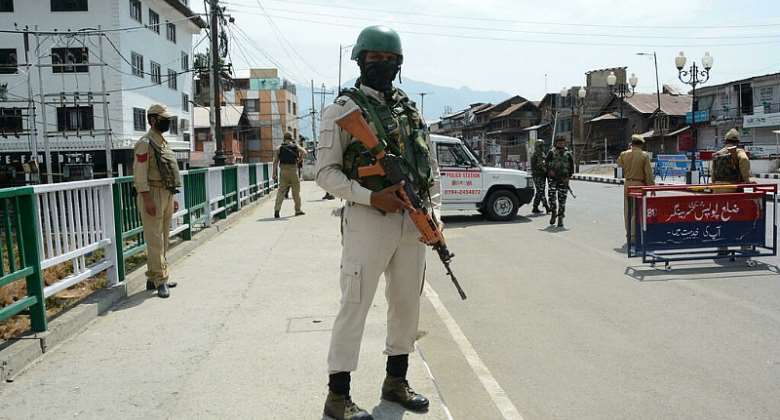 Recent incidents argeting civilians, mainly non-Muslim minorities has evoked a lot of anger and outrage among citizens in the Kashmir Valley.

A pall of gloom hangs heavy over the boy's higher secondary school in the summer capital of Srinagar's Eidgah locality in Kashmir after armed gunmen shot dead a woman principal and a teacher on Thursday.

A huge posse of policemen ringed the perimeter of the school with curious passers by trying to get a glimpse of what happened in the school premises.

Terror targets minorities
Eyewitnesses said there were no students in the school and teachers had come for online classes on that fateful day.

The masked gunmen knew what they were doing precisely, according to eyewitnesses, as they separated the principal, Supinder Kaur, a Sikh lady, and her teacher colleague, Deepak Chand, a Hindu from Jammu, and fired at them from point-blank range.

“First they demanded to know our identities. Then the Muslim staff was asked to go out of the room while they spoke with the two victims. We don't know what they talked about,” a witness said, wishing to remain anonymous.

The Kashmir Valley has seen a sudden spurt in targeted killings of civilians in recent days.

Just a couple of days earlier, three civilians - prominent businessman and Kashmiri Hindu, a street vendor from Bihar and a transporter were killed in separate incidents in Srinagar and Bandipore.

The Jammu and Kashmir police say 28 civilians have been killed this year as terror groups are changing their strategy and targeting unarmed policemen, civilians, politicians, and now people from minority communities including women.

Police describe the targeted killings as 'hybrid warfare', a new tactic adopted by militants who are training and arming their overground workers with small firearms to kill 'soft targets'.

Close observers claimed it was almost a return of the 90s' in Kashmir, when Kashmiri Pandits or Hindus faced ethnic-cleansing and genocide at the hands of local and Pakistani-backed terrorists.

Some also point out that the selective killing of minorities is a vicious act to convey that there is no room for non-Muslims and non-locals in Kashmir. This intolerant impulse had a larger connotation of hatred against the minorities.

“What we are seeing is quite frightening and unprecedented. The spate of killings has never happened like this,” Pradeep Singh, a businessman from Lal Chowk, the city's commercial hub, told RFI.

“We have lived here right through the heyday of militancy. Nothing happened to our family and relatives. But if these attacks continue, we will have to think of our future,” Manisha Kaul, an entrepreneur told RFI.

Fear runs high
Kashmir has an estimated 16 million inhabitants and is India's Muslim majority state till the government scrapped Kashmir's special status two years ago and split it into two federally administered territories.

Since 1947, the Muslim-majority region has been the point of contention between the nuclear armed states of India and Pakistan.

Kashmir has seen a bloody insurgency in the past few decades, as well as the mass exodus of thousands of Hindus, or Kashmiri Pandits, heavy militarization and a series of security lockdowns triggering reports of human rights abuses.

Congress MP Manish Tewari linked this spurt in terror killing in the Valley to the aftermath of the Taliban capture of Afghanistan and voiced apprehensions on the Punjab front too.

The systematic targeting of civilians, particularly minorities and laborers from outside the state, is a throwback to the early-to-mid 1990s, the most violent phase of the Kashmir conflict.

While the number of civilian killings in recent years is nowhere near that of the 1990s, the increase in such incidents, particularly after the scrapping of Kashmir's special status, has been cause for alarm.