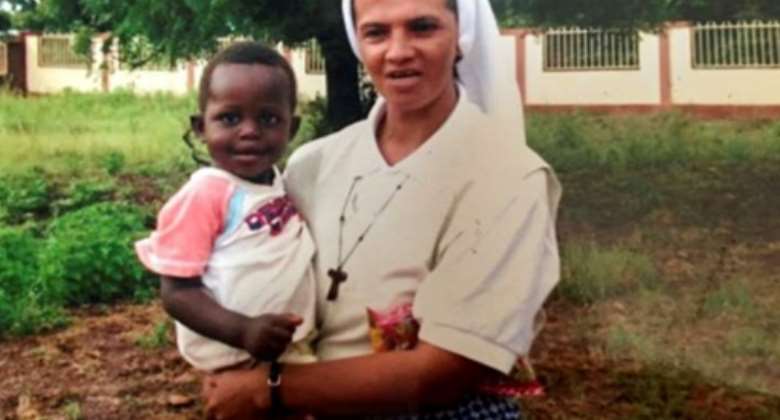 The archbishop of Bamako, Jean Zerbo, confirmed Narvaez's release, adding that she was 'doing well'. By HO (HO/AFP)

A Franciscan nun from Colombia kidnapped by jihadists in Mali in 2017 was freed Saturday, said a statement from Mali's presidential office.

The statement on the presidential Twitter account paid tribute to the "courage and bravery" of Sister Gloria Cecilia Narvaez, and carried photos of her taken after her release.

Her liberation had been the fruit of "four years and eight months of the combined effort of several intelligences services", it added.

In the official statement Malian strongman Colonel Assimi Goita assured the Malian people and the international community that "efforts are underway" to secure the release of all those still being held in Mali.

The archbishop of Bamako, Jean Zerbo, confirmed Narvaez's release, adding that she was "doing well".

"We prayed a lot for her release. I thank the Malian authorities and other good people who made this release possible," the archbishop said.

Her brother, Edgar Narvaez, also confirmed her release in a brief conversation with AFP.

"She is in good health, thank God. They sent me pictures and she looks well," he said.

A source close to the negotiations to release her told AFP she had not been ill-treated during her captivity and during that time she had learned the Koran.

A source close to the airport at the capital Bamako, who asked to remain anonymous, told AFP that the nun had arrived there to take a flight for Rome, which the archbishop's office confirmed.

Narvaez was taken hostage on February 7, 2017, at Koutiala, around 400 kilometres (250 miles) east of the Malian capital Bamako, while working as a missionary there.

There were irregular reports about her over the years, including at the beginning of 2021, when two Europeans who managed to escape captivity reported that she was well.

Talks to obtain her release lasted 'for months, years' said one source. By - (SITE INTELLIGENCE GROUP/AFP/File)

Then in March, her brother received proof that she was still alive, passed on from the Red Cross.

It was a letter written in capital letters "because she always used capital letters" containing the names of their parents and ending with her signature, he told AFP earlier this year.

Mali has been struggling to contain a jihadist insurgency that first emerged in the north of the country in 2012, and which has since spread to neighbouring Burkina Faso and Niger.

Kidnappings, once rare, have become more common in recent years as a security crisis has deepened in Mali, particularly in the centre of the former French colony.

French journalist Olivier Dubois was abducted on April 8 in northern Mali by jihadists affiliated with al-Qaeda.

Dubois, who worked with several French news outlets, said in a hostage video that the Group to Support Islam and Muslims (GSIM), the largest jihadist alliance in the Sahel, had abducted him.