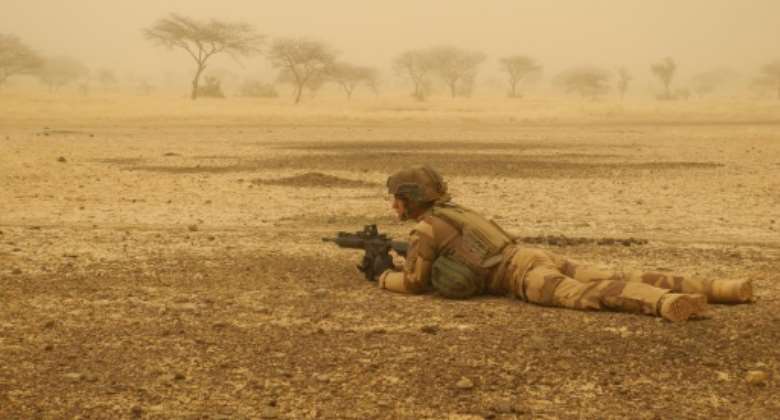 France and Mali have been engaged in a diplomatic spat over the presence of French troops in the Sahel country's jihadist-plagued regions. By DaphnÃ© BENOIT (AFP/File)

Sitting outside their homes in Mali's capital Bamako, Amboungo Guindo and Bilal Ba go back and forth about the merits of Russian involvement in their conflict-torn nation.

"Your stories about the Russians are nonsense," Guindo tells his friend. "How can they solve the problem with 1,000" paramilitaries?

Ba replies: "They will come and they will do better than France".

The conversation touches on simmering popular frustrations with France's military involvement in its former colony's fight against a grinding Islamist insurgency.

Tensions were already raised over French plans to scale back its military presence across the jihadist-ridden Sahel -- and over two coups in Mali in little over a year.

Then a diplomatic spat erupted last month after it emerged that Mali is reportedly considering hiring 1,000 paramilitaries from the Russian private-security firm Wagner.

The move is anathema for Paris, which first deployed an anti-jihadist force to the semi-arid region in 2013 and has lost 52 soldiers since. France has warned that any deal with Wagner would put its deployment in doubt.

But in some quarters in Mali, criticism of the West African country's security arrangements have been viewed as a high-handed attack on national sovereignty.

Tensions spilled over at the UN general assembly last month when Malian Prime Minister Choguel Kokalla Maiga accused France of a "sort of abandonment in full flight" over its military scaledown.

However Maiga's comments appear to have struck a chord in Mali. Malian news website Benbere hailed the prime minister as a "hero," while other local outlets described France as condescending.

"Frankly, to go and say that at the UN is no mean feat," said Guindo, smiling.

Absent credible polling in a vast nation where jihadists control swathes of territory, it is difficult to assess how most Malians view the diplomatic dust-up.

Anti-French sentiment has long been rife on social media. There are also periodic protests against France's military, where demonstrators fly Russian flags.

France deployed troops in Mali after jihadists seized control of the north in 2012.

But their presence failed to stop the conflict spiralling, and it has since spread to central Mali as well as neighbouring Burkina Faso and Niger.

He charts the change in tone to May, when strongman Colonel Assimi Goita strained already tense relations with France by orchestrating his second coup in a year.

However he overthrew the leaders of that government in May -- in a second putsch -- and was later himself declared interim president.

On Friday, Macron told an Africa-France summit in Montpellier that he was closing bases because it was not France's "job to stay in Mali over time".

"France is only there to fight terrorism, not to support this or that regime," he added.

Haidara said that pitting France against Russia "works very well" at home, especially since "the French intervention has not really improved the security situation".

Mali's combative stance appears to be less popular in conflict-ridden parts of the country.

"These colonels have promised to get to work, we just want them to do it," said an activist in the northern city of Gao, who requested anonymity.

He added that Mali has no choice but to work with international partners, whether Russian or French. "Alone, it will be impossible," he said.

"There is a fever, it will subside. It will have created damage and mistrust," he told AFP.

In an interview with AFP on Thursday, Prime Minister Maiga sought to play down the tensions.

"Mali and France are an old couple, there are sometimes domestic scenes," he said, adding that he didn't think there would be a divorce.

"There is no anti-French sentiment. I say it loud and clear: too many things link Mali to France."

Jihadists have continued to stage attacks as leaders in Bamako and Paris have traded barbs.

On September 28, an attack on a mining convoy killed five gendarmes in western Mali -- an area usually spared the turmoil of the north and centre.

The danger is not lost on most locals.

"While we're talking, the jihadists are acting," said Bilal Ba, sitting outside his house.