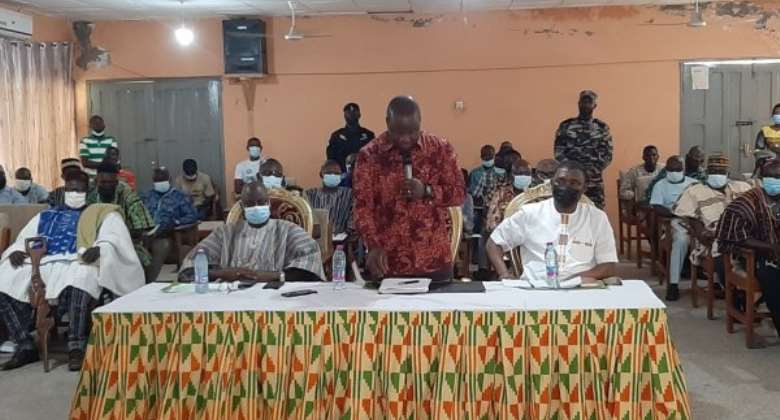 Mr Samuel Abu Jinapor, the Minister of Lands and Natural Resources has said so far the Upper East Region has the highest deposits of mineral resources in Northern Ghana.

“The Upper East is increasingly becoming a mining destination in our country. In the past, the conventional assumption was that mineral resources were found only in the South, and that Northern Ghana did not have mineral resources; gold and the like.

Mr Jinapor said this when he addressed the Upper East Region House of Chiefs in Bolgatanga, the Regional capital, as part of his one-day working visit to the Region to interact with stakeholders in the sector.

“It is absolutely important, and we must do that now. We don't have to wait like it happened in Southern Ghana for the mining to be done irresponsibly, for the river bodies to be polluted, and all kinds of chemicals used for the mining,” he said.

The Sector Minister, who is also the Member of Parliament (MP) for the Damango Constituency, said mining operations in the Region must be organised in such a way that the value chain would be retained in the Region.

He said the relationship between the mining companies and the Chiefs in terms of royalties was important, and gave the assurance that government was committed to working closely with the House of Chiefs.

“So that Upper East will become a model for the mining industry for the whole of the country, where mining is done in a manner that doesn't pollute water bodies, destroy the land and doesn't degrade the environment,” the Minister said.

Mr Stephen Yakubu, the Upper East Regional Minister, thanked the Minister for his visit to the Region and the initiative to interact with the Chiefs, noting that the mineral resource deposits were on lands within their jurisdictions.

Naba Atasige III, who is the Paramount Chief of the Mirigu Traditional Area, said it was a source of sustenance for the poor and a major cause of environmental degradation, violence, crime, deaths among others.

“We the Chiefs of the Upper East Region will therefore want government to sustain its effort at regularising the sector to curb the menace and promote peace and harmony in the mining sector,” he said.

Mr Jinapor was accompanied by Mr George Mireku Duker, the Deputy Minister for Lands and Natural Resources and MP for the Tarkwa-Nsuaem Constituency and other officials from the Ministry.

Planting for Food and Jobs failed due to poor implementation...
56 minutes ago