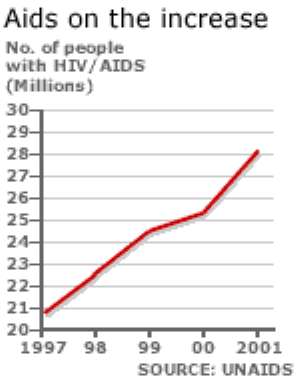 With the continuous spread of HIV/AIDS among the population of the outlying rural communities in the Ghana, with its heavy toll on the 15- 45 year age groups, who constitute the economically productive sector of the county's economy, there is the pressing need to launch a new communication campaign to check the spread of HIV/AIDS in these communities. As a first step to developing a comprehensive communication campaign to address this issue, there is the need to undertake a formative research of the current situation. The formative research will enable the ministries of Health and Agriculture, who are proposed as the joint partners in the launching of this campaign to establish key factors that have contributed to the spread of HIV/AIDS in these communities. In summary, the formative research will help to establish the following: · Identify the target population for which the communication campaign on AIDS prevention and control is intended.

· Establish the mode of transmission of HIV/AIDS among the target population, is it through heterosexual or homosexual behaviors.

· Examine the existing channel s of communication available to the target population and how effective these channels are in the dissemination of information.

· Find out the views of the various communities about HIV/AIDS as a disease.

· Identify the existence of family planning outreach programs and the extent to which these programs are effectively being implemented It is my view that the formative research is conducted through the adoption of focus group discussion with members of the target population and also in-depth interviews with selected members of the communities and opinion leaders. With the formative research serving as the situation analyses of the spread of HIV/AIDS in these communities, the next phase of the project will be to design the messages for the HIV/AIDS prevention and control campaign. This phase of the project will entail setting the major objectives that the campaign should achieve. In view of the devastating effect of HIV/AIDS on the rural farming communities in the Ghana, the campaign objectives should be:

· To reduce the spread of HIV/AIDS particularly among those in the age category of 15-45, in the rural farming communities of the Ghana

· Educate the target population by providing adequate information on HIV/AIDS to the communities in general and those in the age group category of 15-45 in particular.

· To make available to these communities any innovation that has the potential of reducing the spread of HIV/AIDS. These objectives can be achieved based on a good understanding of the theoretical frameworks from which they are derived. The objectives of reducing the spread of the disease, and the need to educate the population through the provision of information, necessarily require behavioral attitude change on the part of the communities, with respect to the spread, prevention and control of HIV/AIDS. In this regard the most widely used theoretical background relate to social learning and social marketing. Social Learning Theory, depicts the attributes of behavioral expression that connotes reciprocal interaction between an individual, environment and behavior. In addition, Social Learning Theory identifies the internal personal factors such as self-efficacy and outcome expectation, that tend to influence the development and maintenance of behaviors. The perception of self -efficacy, derives from accomplishments, vicarious experiences, verbal persuasion and physiological state. This evolves into four methods of practice, modeling, suggestion and climate setting that is designed to ensure transfer of learning (Akyeampong et at,1996). Social Marketing Theory is the design, implementation, and control of programs calculated to influence the acceptability of social ideas and involving considerations of product, planning, pricing, communication, distribution and marketing research. Thus Social Marketing Theory entails the application of marketing concepts and techniques to the marketing of various socially beneficial ideas and causes instead of products and services in the commercial sense (Reading Packet,1996). The principal rationale for the use of these theoretical frameworks, is to influence behavioral change and also make available to the communities the innovations that will help check the spread of HIV/AIDS. In the message design of this campaign, it is very important to adopt participatory communication as a key component, aimed at motivating the communities, to effectively take an active role in the prevention and control of the spread of HIV/AIDS.

The messages that the communication campaign will disseminate will have to emphasize the following ideas: · AIDS is a disease for which there is no cure, the major idea is to stress that AIDS is not a curative disease.

· The methods contracting the disease vary

· There are many way of preventing the possibility of getting infected with the virus that causes HIV/AIDS.

· The products that can help to prevent and control the spread of the disease are available,

· There is information on the disease also available. Channels of Communication To effectively implement this HIV/AIDS prevention and control program, the ministries of Health and Agriculture need to take into serious consideration the channels of communication, that can help convey the intended messages of the campaign to the target population. In view of the fact that the rural communities in Ghana do not have access to traditional media channels such as radio and television, the most viable option that the ministries can adopt, is to use the non-traditional channels of communication that involve the use of interpersonal communication links. This will involve the prominent stakeholders in the communities. These may include the following organizations and individuals:

· The religious bodies such as the Christian denominations and the Imam of the Moslem community.

· Teachers of the community schools

· The chiefs of the various communities

· People who have contracted the disease and are willing to relate their experiences and those who have over an extended period adopted innovations such as condoms, and can attest to its efficacy in the prevention of sexually transmitted diseases. Development , Pre-testing and Revision The message concepts will have to be designed and pre-tested with a cross section of the target population for revision. The purpose of this pre-testing is to examine the clarity of the messages and verify the intended and non-intended results or effects of these messages. The findings to be generated form this, will help to reshape key areas of the campaign that need to be revised. These areas could address the objectives, distribution strategies, and communication channels.

Implementation , Monitoring , and Assessment The campaign should be implemented over a proposed period to be decided by the joint program partners, that is the ministries of Health and Agriculture. These ministries are expected to invest substantially in the form of publicity and educational materials in the local languages for the affected communities. The goals of the publicity phase of the campaign is to:

· Inform the communities about the HIV/AIDS disease and how they may participate in a program designed to prevent and control the spread of the disease.

· To encourage the target group and the communities at large to adopt the use of condoms for safe sexual activity. The next phase of the implementation will involve: · The selection of a staff pool from both ministries

· Establishment of an organizational structure that will comprise of supporting technical services in the field of research and the training of social marketing personnel from the ministries and within the affected communities such as traditional birth attendants and local health nurses form the community health centers.

· Distribution and dissemination of information and preventive innovations to stakeholder that is teachers, agricultural extension officers, chiefs and the religious organizations. Monitoring systems will be established to identify problems and oversights for adjustment.

Evaluation There should be an effective mechanism that will account for the pre-testing and post testing of the impact of the campaign. It is also important to do surveys and cost - benefit analysis. In general, the cardinal objectives of the evaluation is to: · To measure the extent to which the program objectives have been achieved

· To measure the campaign outcomes in terms of the prevention and control of the spread of HIV/AIDS in the communities.

· To make decision for future related campaigns with similar objectives

Flood destroy documents at Lands Commission in Accra
24 minutes ago

Nkroful-Essiama: Motorists, residents stranded due to eroded...
24 minutes ago