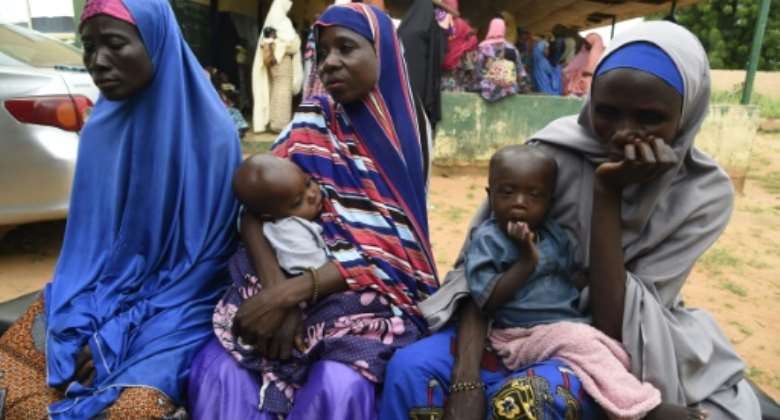 Maryam Aliyu, centre, at a displaced camp after violence forced them from their homes in Nigeria's northwest. By PIUS UTOMI EKPEI (AFP)

Maryam Aliyu and her six children were lying next to each other fast asleep when gunmen broke into their home in northwest Nigeria.

"Suddenly I saw light all over me. I came out of the mosquito net and there were four men with AK-47s," the 25-year-old said.

"They pointed their guns to my chest and ears and told me to hand over everything I had."

Gangs of heavily armed criminals known locally as bandits have terrorised northwest and central states of Africa's most populous nation for years.

But violence has spiralled in recent months, forcing thousands of already vulnerable people like Aliyu to flee their homes in a situation that aid agencies fear risks becoming a humanitarian crisis.

When gunmen attacked her village of Danjiro in Sokoto state's Goronyo district last month, Aliyu had only 400 naira ($1), as was the case most days.

The men in balaclavas took her cash along with half a bag of rice.

Most of those displaced by the bandit violence are women and children. By PIUS UTOMI EKPEI (AFP)

"They even stole the wrapper on which my children were sleeping," said Aliyu, tears rolling down her cheeks.

Another resident, Fatima Sal'Hatu, said that "if they don't kidnap you, they molest you, they steal what you have."

"They usually try to rape us," said the 35-year-old mother of five, who survived a separate attack in Goronyo.

"We fled without anything, not even our shoes."

Both women now live in a congested camp for the displaced about five kilometres (three miles) from their village.

More than 1,600 people have arrived at the camp in recent weeks, according to UNICEF, in desperate need of food, protection, shelter and clothes.

"We send the children to get firewood to sell and buy food, but if we don't sell any, we don't eat," said Sal'Hatu.

"We sometimes sleep without having had food that day."

Even water was unavailable, she said, until a non-profit organisation repaired a well.

Sokoto is one of the Nigerian northwestern states hit by bandit violence. By (AFP)

"What we are watching in the northwest is a situation that will soon blow up in our faces," said Maulid Walda, chief of UNICEF'S field office.

Insecurity has worsened an already dire situation, Walda said, for residents among the poorest in Nigeria and with the highest infant and maternal mortality rates.

Yet the region attracts much less attention than the country's northeast, where jihadist groups are fighting a 12-year conflict that has displaced two million people.

There is a "tendency from the international community to rush" to where "the situation is more sexy," Walda said.

"If donors and the international community are not interested in doing what needs to be done today, in a few years we will be dealing with a situation that a lot of people will regret," he said.

"I am worried about this brewing humanitarian crisis."

At a nutrition clinic supported by UNICEF in Sokoto North, outside the city, more than 50 women with small children waited to receive a small pack filled with nutrient paste designed for acute malnutrition.

Among them was Zara'u Dahiru, 22. Bandits raided her village of Tudun Kosai in Tangaza district last month, killing her neighbour and abducting two others.

Aid agencies fear a new humanitarian crisis is brewing because of the violence and displacement. By PIUS UTOMI EKPEI (AFP)

"We hid in the crops and when day broke, we came here," she said.

Dahiru and others fled to safety but now, far from their farmlands, eating has become a problem.

Her 14-month-old boy's health has deteriorated. "I think it's hunger," she said.

Since January 2020, about 50,000 people fled from their homes in the northwest alone, according to the International Organization for Migration.

And more than 80,000 additional people have fled to neighbouring Niger over the past two years.

Sokoto State's security commissioner Garba Moyi told AFP that the state "government does everything possible" about the bandits, "including sitting with them to talk".

But he added that "a criminal is always a criminal," and while some gave up, others "continued with their problems".

Aid agencies like UNICEF are offering medical and other services to those displaced in the region. By PIUS UTOMI EKPEI (AFP)

For Moyi, more help is needed from the federal government.

"We know our problems, and we know the solutions, but we don't have the capacity to overcome the problems," he said.

Nigeria has launched numerous military operations in the region, and just last week said it had "neutralised" nearly 300 bandits. But violent attacks have continued.

He told AFP that during his latest abduction he was kept in a forest for several days, blindfolded, chained to a tree.

"They tortured me... They would fire blanks at my head and kept telling me they were going to kill me," Danjero said.

"They would hit my legs and my back like a cow," he said, showing marks of his beating.

Some of the displaced are in camps not far from the state capital Sokoto City. By PIUS UTOMI EKPEI (AFP)

His family raised one million naira ($2,400) both times, to secure his release.

As a result, one million young Nigerians will likely stay away from school this year, UNICEF said.

Across the northwest, a fertile agricultural region almost the size of Britain and home to more than 35 million, farming has also become too dangerous for many.

Walda is worried about a lost generation.

"When young people lose hope, when they are frustrated, when they see no future... the only option for many of them is actually to take up guns and become bandits themselves."

Planting for Food and Jobs failed due to poor implementation...
34 minutes ago