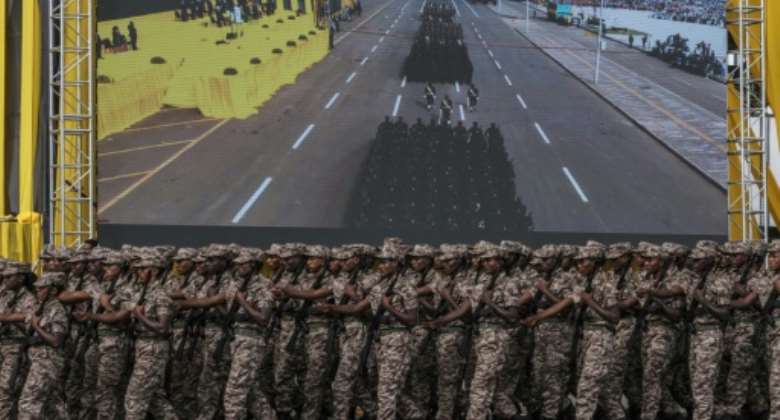 Ethiopian defense forces during the inauguration of the new government in Addis Ababa on October 4, 2021. By EDUARDO SOTERAS (AFP)

The UN Security Council held an emergency meeting -- the second in less than a week -- to address the expulsion of seven UN officials, a decision that has raised fears of setting a precedent for other conflict zones.

The UN estimates conflict has driven hundreds of thousands of people into famine-like conditions in northern Ethiopia.

"This makes last Thursday's announcement by the government of Ethiopia to expel seven senior UN officials -- most of them humanitarian staff -- particularly disturbing.

"This unprecedented expulsion should be a matter of deep concern for us all as it relates to the core of relations between the UN and member States."

Officials from Ethiopia were due to take part in the UN meeting.

Guterres, who has said more than five million people require humanitarian assistance in Tigray, urged Ethiopian authorities to allow the UN to deliver humanitarian aid "without hindrance and to facilitate and enable our work with the urgency that this situation demands."

He also criticized Ethiopia for not following the procedures in place in case of problems with UN officials within countries.

On Friday, the UN Security Council met behind closed doors to discuss the expulsion of officials who were accused of "meddling" in Ethiopia's internal affairs and of political manipulation of humanitarian aid.

The United Nations believes that declaring UN officials "persona non grata" is illegal because it violates several articles of the UN charter.

It has complained to Ethiopia in a letter seen by AFP, saying the UN has not been given "any information" on the officials' alleged actions.

UN spokesman Stephane Dujarric said on Tuesday that Ethiopia has not provided any additional information.

The meeting on Wednesday was requested by the United States, Ireland, Estonia, Norway, Britain and France.

On Friday, the Security Council could not agree on a statement proposed by Ireland due to opposition from China and Russia.

Speaking on condition of anonymity, an ambassador of a Security Council member state told AFP that "we should move on to political negotiations."

The expulsions sent shockwaves through the UN, where such moves are rare.

The United Nations believes that declaring UN officials in Ethiopia "persona non grata" is illegal because it violates several articles of the UN charter. By Ludovic MARIN (AFP/File)

UN humanitarian chief Martin Griffiths, whose recent statements about the "blocking" of humanitarian aid and a growing risk of famine could be behind the decision, dismissed the allegations against the UN as false at the Security Council meeting on Friday, but did not say what they were, another ambassador of a council member told AFP.

The ambassador also said that the expulsions in Ethiopia could set a dangerous precedent for conflicts in Myanmar or Afghanistan.

"If we don't resolve the situation in Ethiopia, it could create a snowball effect," the ambassador added.

'We will stand united to oppose e-levy' – Haruna Iddrisu but...
38 minutes ago