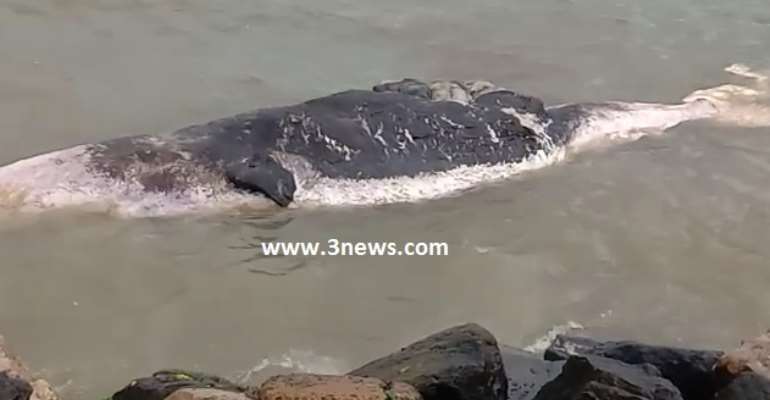 A marine mammal suspected to be a whale has been washed ashore on the coast of Nkotompo, a suburb of Sekondi, in the Sekondi Takoradi Metropolis of the Western Region.

The marine mammal measuring about 7-feet has its intestines gushed out with other parts of the body notably the tail decaying.

According to bystanders, the animal was first spotted few nautical miles away from the direction of Port of Takoradi anchorage around 2:00pm Wednesday, October 6.

Upon inspection when it got close to the shore of Nkotompo, they said the intestines had gushed out and already decaying.

From the cut, the bystanders are suspecting that the propeller of a sea vessel might have killed the marine mammal.

Some fishermen among them predicted that the incident might have happened weeks ago given the level of decay.

A pungent smell engulfed about a 100-radius range where the mammal is currently floating along the sea defense stretching from Nkotompo to Sekondi.

The last time a similar incident happened around Nkotompo was in September, 2013.