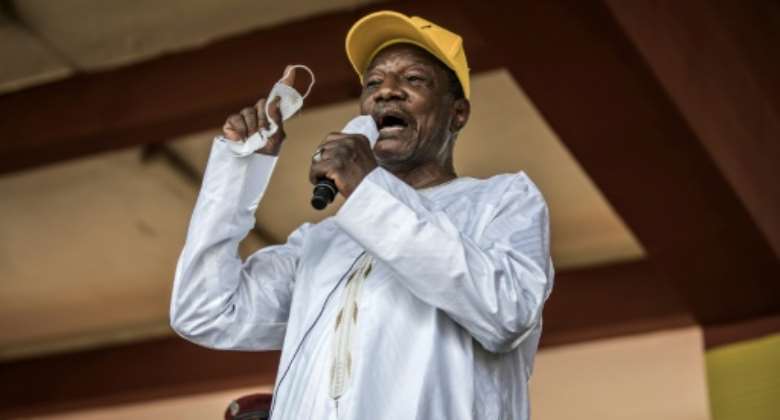 Conde, pictured at an election campaign rally in October 2020. By JOHN WESSELS (AFP/File)

Conde, 83, was ousted in a military coup on September 5 after he cracked down on protests and won a controversial third presidential term last year.

Guinea's ruling junta is under diplomatic pressure to release the former president, whose whereabouts are unknown.

The issue remains sensitive as opposition groups fear he will try to regain power if released.

On September 17, the junta ruled out the possibility of exile for Conde, saying he "is and will remain in Guinea."

Wade nevertheless offered to put Conde up in his Dakar villa, according to a statement released by his political party on Tuesday night.

Conde could use the villa as a "temporary retreat in which to think, without cutting yourself off from your base," the offer said.

Wade would be "shortly" moving out of the villa to return to his family home, which is undergoing renovation, the statement added.

Senegal's presidency has not yet commented on the offer from Wade, who governed the West African country between 2000 and 2012.

He was defeated in a 2012 presidential election while running for a third term, which critics at the time argued was unconstitutional.

Conde, a former opposition figure, became Guinea's first democratically elected president in 2010 and was re-elected in 2015.

But last year he pushed through a new constitution enabling him to bypass a two-term presidential limit and run for a third time in October 2020.