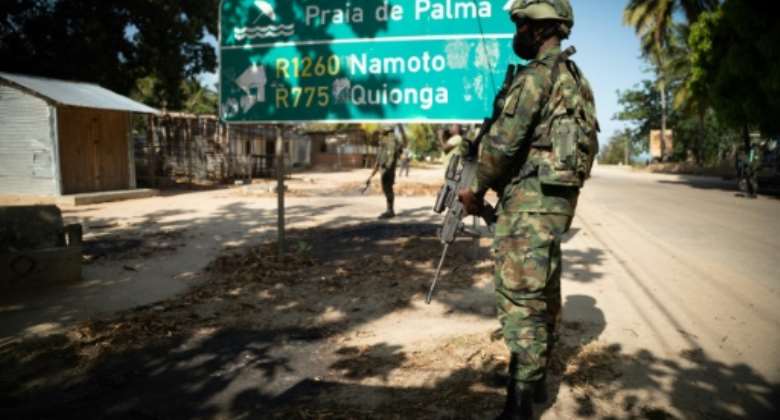 Northern Mozambique has been buffeted by Islamic State-linked militants who have targeted towns and villages for the past four years. By Simon WOHLFAHRT (AFP/File)

The Southern African Development Community (SADC) deployed a three-month mission from July 15 to Mozambique, part of a deal reached in June by the 16-nation bloc.

Northern Mozambique has been buffeted by Islamic State-linked militants who have targeted towns and villages for the past four years, in a wave of violence that has claimed at least 3,340 lives and displaced more than 800,000 people.

On Tuesday, the presidents of South Africa, Botswana, Namibia and Mozambique met in Pretoria and resolved to allow the SADC operation to continue.

In a statement the bloc said the meeting had "approved the extension" of the mission "to continue with offensive operations against terrorists and violent extremists to consolidate stability of security".

It did not give a timeframe for the extension.

South African President Cyril Ramaphosa pointed to "progress" having been made to help Mozambique secure peace and security.

"Mozambique will never walk alone, we will always be there to walk with Mozambique and indeed SADC as a family is determined to walk with any of its member countries whenever the need arises," Ramaphosa said.

Earlier Ramaphosa had expressed confidence that "security and stability in Mozambique will be restored".

The militants locally known as Al-Shabab -- though they have no known link to the jihadist group of the same name operating in Somalia -- are fighting to establish a caliphate.

They staged their first coordinated attacks by targeting police stations on the night of October 5, 2017.

South African troops in Mozambique -- their mission has now been extended. By Alfredo Zuniga (AFP)

The extremist attacks gradually increased and escalated last year, culminating in March with coordinated raids on the gas hub and port town of Palma which triggered the flight of around 100,000 people, according to the UN refugee agency.

Dozens of people were killed, some decapitated during the attack.

The UN children's agency UNICEF on Tuesday said children have been forcefully recruited into the ranks of the jihadist group in Mozambique's northeast.

Last week Human Rights Watch reported that Al-Shabab had kidnapped hundreds of boys in the northeastern region and forced them to join their ranks as child soldiers.

"In those areas... we consider thousands of children to be at risk and certainly no children so far have been released," UNICEF spokesman James Elder told reporters in Geneva.

The violence has also disrupted major gas exploration projects and raised fears it could spread to neighbouring countries.

Under a deal with Mozambique, Rwanda became the first foreign army to deploy boots on the ground, sending in 1,000 soldiers weeks before SADC.

The total size of the SADC deployment has not been revealed, but South Africa has the largest contingent of around 1,500.

At the weekend, SADC said its forces had killed a local jihadist leader and 18 fighters during a military strike on one of their bases.

Aside from host Ramaphosa, other presidents at the day-long talks were Botswana's Mokgweetsi Masisi, Namibia's Hage Geingob and Mozambique's Filipe Nyusi.